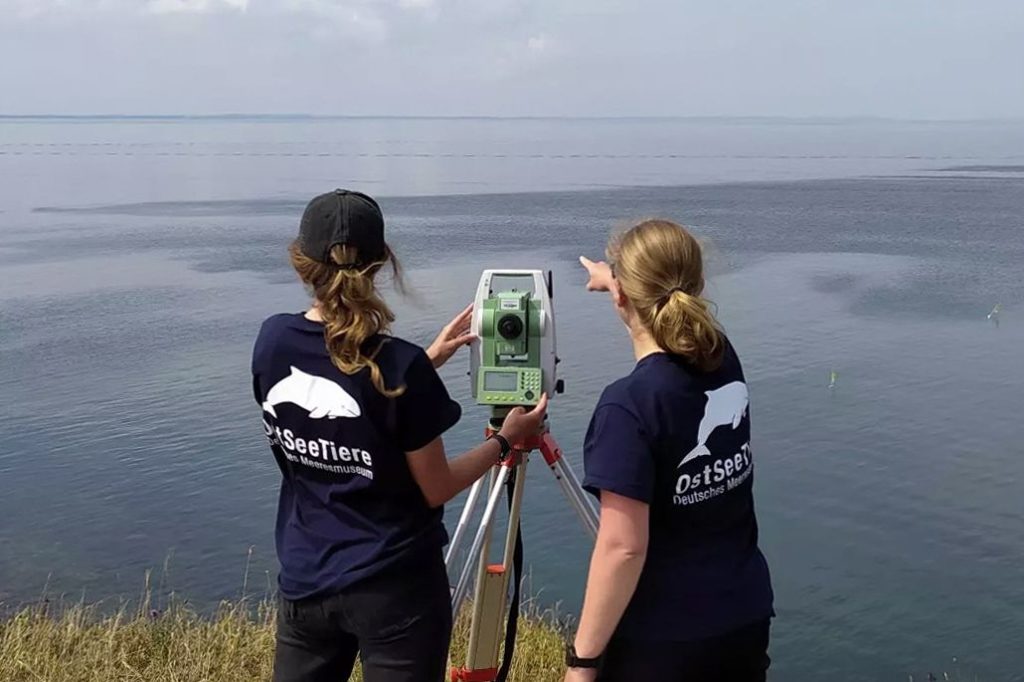 In order to reduce bycatch of harbour porpoises in gillnets, fishermen have been using so-called Porpoise ALerting Devices (PALs) voluntarily off the coast of Schleswig-Holstein since 2017. In an international research project, scientists are now and until the end of 2024 examining the effectiveness of the bycatch reduction and the long-term effects of the warning devices.

At the beginning of this summer, an extensive field experiment began off the Danish north coast near Fyns Hoved under the lead of the German Oceanographic Museum, a member of the DAM, in Stralsund. With the help of drones, classic visual surveying techniques and underwater listening stations, the researchers are investigating both the behaviour of harbour porpoises during echolocation and how close they approach an experimental net where PALs send out warning signals. “The artificial signals emitted by PALs are similar to a natural aggressive clicking sequence used by harbor porpoises to alert other porpoises to potential danger. Bycatch rates have been reduced by this device in large-scale fisheries trials, but it is unclear whether the principle is also effective in the long term and whether it affects the long-term spatial distribution of harbour porpoises,” says project leader Dr Michael Dähne from the German Oceanographic Museum.

The scientists from Stralsund have decades of experience in bioacoustic research on small cetaceans living in the Baltic Sea. Now the researchers are combining their expertise with the data, logistics and experience of the Thünen Institute for Baltic Sea Fisheries in Rostock, University of Aarhus, Naturhistoriska Riksmuseet in Stockholm, Marine Zoology Nehmten and the Baltic Sea Information Centre in Eckernförde.

Since PALs have already been used in Schleswig-Holstein since 2017 without monitoring bycatch rates, data must now be collected from harbour porpoises in Denmark that have not yet “heard” PALs. This data will then serve as a basis for comparison to determine whether the animals are becoming accustomed to PALs and whether this in turn could possibly have an impact on the efficiency of bycatch reduction.

In December 2013, voluntary measures to reduce harbour porpoise bycatch took effect for the first time in Schleswig-Holstein. Since 2017, fishermen who wish to equip their nets with PALs have been provided with the devices free of charge via the Baltic Sea Information Centre Eckernförde. “With the help of the fishermen, we want to answer the question of the long-term effect of the PALs,” explains Dr Christian von Dorrien from the Thünen Institute for Baltic Sea Fisheries in Rostock. “We are working towards making fisheries sustainable and that simply includes reducing porpoise bycatch as much as possible.”

In addition to German partners, Aarhus University and the Naturhistoriska Riksmuseet in Stockholm are involved in the project. “Our project partners from Denmark and Sweden allow us to work in areas where PALs have not yet been used. Together, we want to reach conclusions about whether the devices are applicable to other harbour porpoise populations,” explains Michael Dähne. “The harbour porpoises of the inner Baltic Sea are threatened with extinction – but whether PALs are applicable for these animals still has to be clarified. The few remaining animals need absolute protection, which may not be realized by these acoustic alarm devices.”

With a size of 20 terabytes, the first acoustic and visual data collected in Denmark this summer are so extensive that it currently needs to be screened further. However, it is already clear that the reactions to the PALs and the experimental net are diverse and will provide numerous new insights into how porpoises react to gill nets and alerting devices.

Header picture: The exact positions and movement routes of the spotted porpoises were measured with a theodolite. Photo: University Aarhus / Julie Sofie Larsen