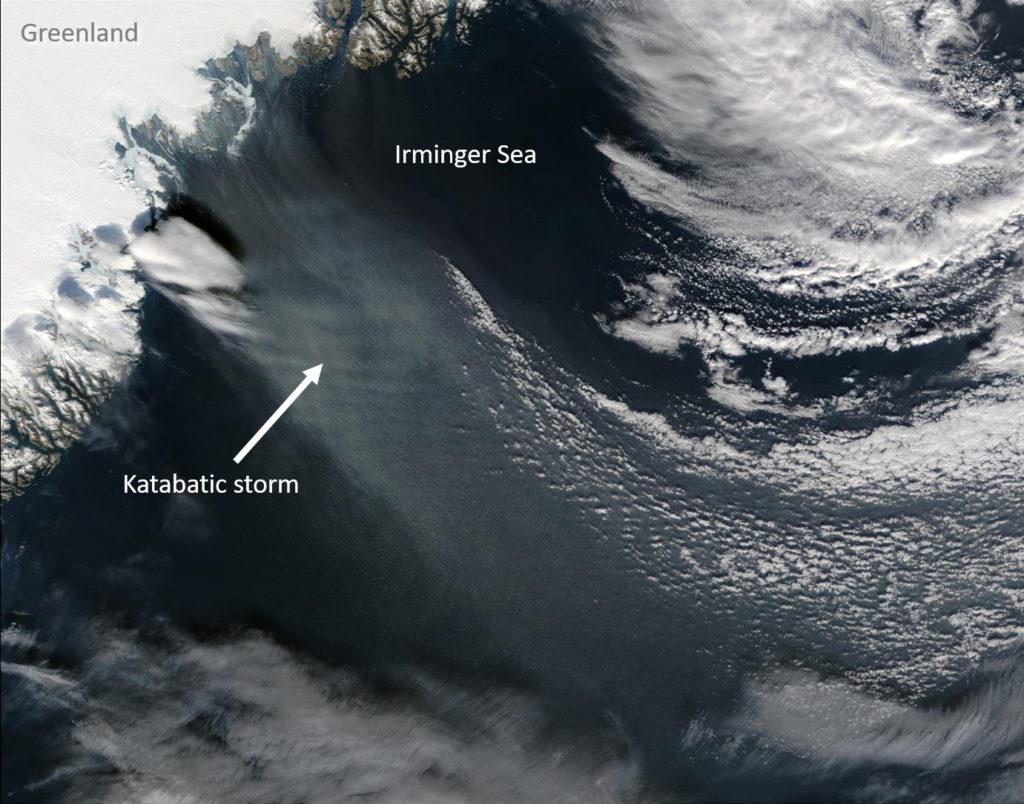 In a new study in the Journal of Geophysical Research: Oceans, Dr. Oliver Gutjahr (Universität Hamburg, Max Planck Institute for Meteorology (MPI-M), a member of the DAM) and his colleagues Dr. Johann Jungclaus (MPI-M), Dr. Nils Brüggemann (Universität Hamburg, MPI-M), Dr. Helmuth Haak, and Prof. Jochem Marotzke (both MPI-M), investigate for the first time in a global storm- and eddy-resolving (5 km) model the interaction of atmosphere and ocean during a katabatic storm in the Irminger Sea off the coast of southeast Greenland. The authors show that due to the very high wind speed and the very cold and dry air in such a storm, enormous amounts of heat are extracted from the sea near the coast. The cooled and thus denser water then sinks to depths of up to 1000 m, contributing to the Atlantic overturning circulation at subpolar latitudes.

Katabatic storms – ‘piteraqs’ in Greenlandic, meaning “that which assails one” – can reach hurricane force and temperatures well below -20°C. They form when a low-pressure system is located off the coast of southeast Greenland, directing dense and cold air masses from the Greenland Ice Sheet through the steep and narrow fjords, causing them to accelerate and grow into pronounced storms. Conversely, katabatic winds themselves can also trigger mesoscale (~200 km diameter) lows, also called polar lows, off the coast of southeast Greenland, which then amplify the katabatic winds to hurricane force. However, as the authors show, there is another phenomenon that contributes essentially to the formation of a piteraq, namely the breaking of a mountain wave. Similar to how waves form on the ocean surface, a wave forms at the boundary of the katabatic flow and overlying air, which can grow steeply for several kilometers before finally breaking, transferring additional mechanical kinetic energy (momentum) into the near-surface katabatic storm and accelerating it.

Katabatic storms have been scarcely studied and, due to their small spatial extent, could so far only be simulated with regional atmospheric models. The effect of these storms on the ocean could only be shown by the study of Gutjahr et al. When these freezing (below -20°C) and dry downslope winds hit the relatively warm (-1.8° to about 4°C) ocean, the strong temperature and moisture contrast with the ocean surface creates a strong turbulent exchange of energy in the form of sensible and latent heat and an input of momentum into the ocean. Heat loss and momentum input create strong turbulence that mixes the near-surface water layers. The cooled water becomes denser than the surrounding water and sinks to depths of up to 1000 m.

The study by Gutjahr et al. demonstrates that katabatic storms contribute to the formation of dense deep water in the Irminger Sea and thus to the overturning of Atlantic water, which is significantly influenced by offshore heat loss. Katabatic storms account for about 25% of the winter heat loss in the period of nearly two simulation years studied. However, it is crucial to have the high model resolution that is needed in both the atmosphere and the ocean to be able to simulate the formation of katabatic storms and their effect in the ocean.