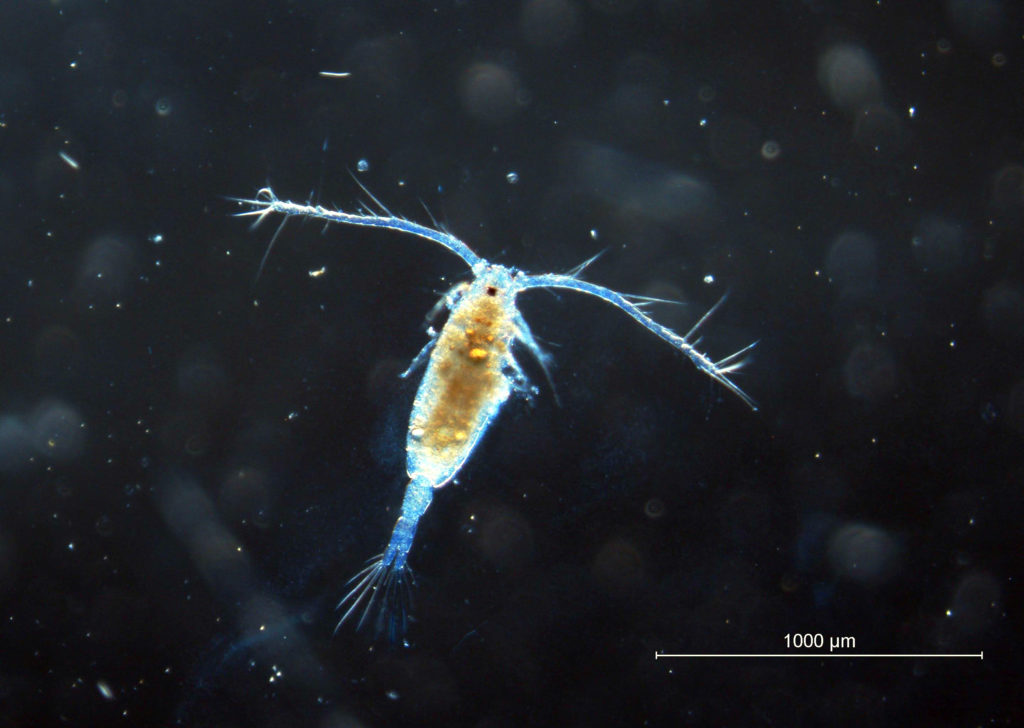 GEOMAR study shows adaptability of copepods as long as not too many stressors come together at the same time.

The copepods, which are important for the food webs of the oceans, can genetically adapt to warmer and more acidic seas. This is the result of a study led by GEOMAR, together with the University of Vermont and the University of Connecticut, which has now been published in the journal Proceedings of the National Academy of Sciences. At the same time, the researchers warn that the adaptability could be limited if other stress factors such as oxygen or food shortage are added. GEOMAR is a member of the DAM.

Copepods are among the most important organisms in the ocean. The millimeter-small animals are food for many fish species and are therefore of central importance for life in the sea. Marine biologists fear that climate change could affect the small crustaceans in the future – and that this could decimate the most important food source for fish and many other marine animals. A team from GEOMAR Helmholtz Centre for Ocean Research Kiel, the University of Connecticut, and the University of Vermont has therefore investigated for the first time in more detail whether copepods can genetically adapt to changing living conditions over the course of evolution. In doing so, they have taken into account both the effect of higher water temperatures and ocean acidification. The work of the U.S.-German group is special because it was one of the first to expose marine animals to multiple stressors in the lab.

The results, recently published in the scientific journal Proceedings of the National Academy of Sciences, are cautiously optimistic. The team, led by Professor Dr. Reid Brennan, marine ecologist at GEOMAR, and Professor Dr. Melissa Pespeni of the University of Vermont, found through detailed genetic analysis that the small crustaceans can indeed adapt to the new conditions over the course of about 25 generations – which corresponds to a period of just over one year, since several generations of crustaceans can mature in a year at moderate water temperatures. The researchers found that as water temperatures rise and conditions become more acidic, gene variants become prevalent in the copepods’ genome that result in the animals being better able to withstand environmental stress. “These mechanisms help, among other things, to ensure that copepod eggs develop properly despite unfavorable environmental conditions and that important metabolic processes continue,” says Reid Brennan.

In its study, the team examined firstly how ocean warming and ocean acidification each affect the animals on their own; and secondly how the two interact. The comparison showed that warming has a significantly greater effect than acidification. This means that under warmer conditions, significantly more genes react and variants shift in frequency. The effect was even greater when the researchers exposed the copepods to both stress factors – warming and acidification. The experts made a disturbing discovery: One might have expected that under combined heat and acid stress, those genes that react to heat and those that react to acidification would change, i.e. that the two would simply add up. In fact, however, a whole series of other genes responded under double stress. For copepods, this means that metabolic stress continues to increase and that it is likely to become even more difficult to adapt.

“The results also show us that we have a hard time assessing how organisms will respond to an increasingly changing marine environment when multiple stressors interact,” says Reid Brennan. “Even if we know how individual stressors work, it is going to be challenging to predict how the organism will respond when, for example, oxygen or nutrient deficiencies are added to the mix,” says Melissa Pespeni. “One plus one doesn’t always equal two when it comes to global change stressors.” This may be especially problematic for organisms that cannot reproduce and adapt to changing environmental conditions as quickly as copepods. In order to learn more about the uncertain future of marine animals, further experiments are to follow in which other stressors will be investigated.

This research follows up on a previous study published by the same team, led by Professor Dr. Hans Dam from the University of Connecticut, that demonstrates that animals adapt quickly, but in a limited capacity, to ocean warming and acidification.

Please note:
This publication is the most recent in a series of work and funded by the National Science Foundation (USA).