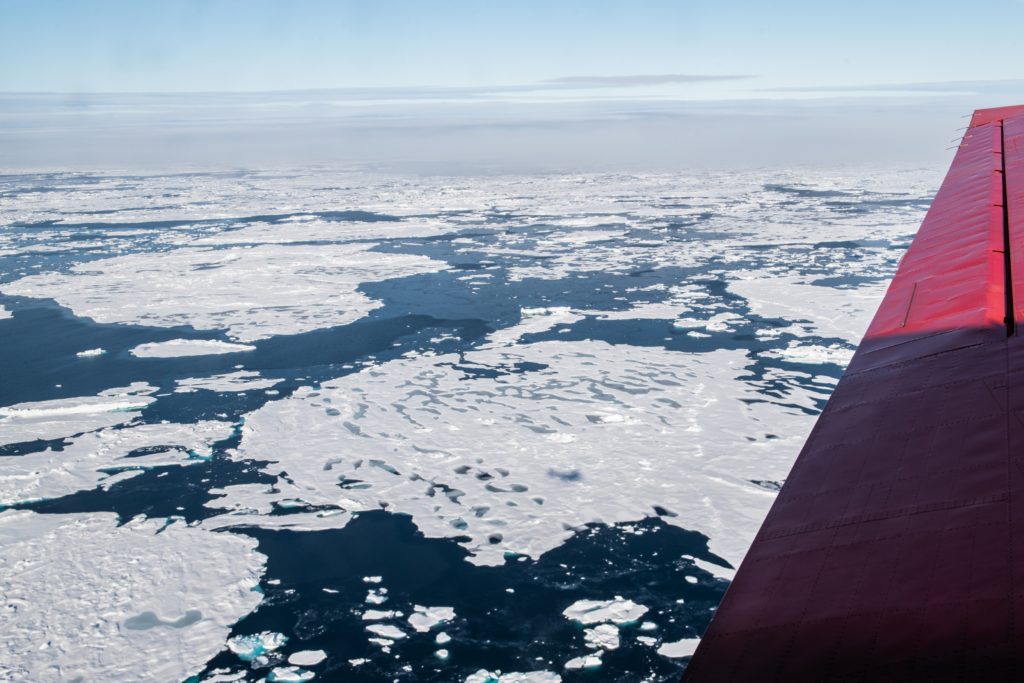 New Method Makes It Possible to Measure Arctic Sea-ice Thickness, Even in Summer

Over the past several decades, the Arctic has warmed much faster than the rest of the world. With consequences for its sea ice. In order to gauge the thickness of ice masses in the North Pole region, scientists chiefly rely on satellites. But this method proves problematic in the summer, when melting processes on the ice’s surface make it difficult to apply. An international team of researchers including experts from the Alfred Wegener Institute, a member of the DAM, has now developed a method that, for the first time, makes it possible to identify changes in the Arctic sea-ice thickness for the years 2011 to 2021 – even during the summer months. The resultant data is especially valuable for shipping in the Arctic and will substantially improve the quality of weather and ice forecasts alike. The results have just been released in the journal Nature.

Satellites have been used to measure the thickness of ice in the Arctic since the 1980s. But the technique has only worked in winter, from October to March, when the ice and snow are cold and dry. “In the summer months the satellites are dazzled by ponds of snow and ice meltwater that pool on the sea ice surface,” explains Jack Landy, the study’s first author, who hails from the Department of Physics and Technology at the Arctic University of Norway (UiT). “Then they have been unable to distinguish between melting ice and water.” But reliable information on the summer sea-ice thickness, Landy stresses, is important for making weather and climate forecasts, and for reducing risks in connection with projects and shipping in the Arctic.

Consequently, Landy and his team drew on artificial intelligence to analyse past satellite data and determine when the satellites detect ice and when they detect ocean. By combining a deep learning method and numerical simulations, for the first time they succeeded in using the data to measure sea-ice thickness from space, even during the summer melting phase, with sufficient accuracy. The result: the first sea-ice thickness dataset that covers not only the entire Arctic, but also the entire year.

Comparing their findings with real-world observations allowed the group to gauge how accurate their new method was. In this regard, a great deal of the observational data they drew upon came from the IceBird campaigns conducted by the Alfred Wegener Institute, Helmholtz Centre for Polar and Marine Research (AWI). “We use the AWI’s polar research aircraft to gather information on the composition and characteristics of the Arctic ice, and how they change over time,” says Dr Thomas Krumpen, a climate researcher at the AWI and co-author of the study. “The aerial data is highly precise and covers large expanses. That makes it particularly well suited for validation purposes.”

For a better understanding of processes at work in the Arctic, more precise forecasts and safer shipping

The new satellite data on summer sea-ice thickness is now to be integrated into sea-ice forecasts, so that accurate statements concerning the summer ice extent and volume can be made much sooner. “Now that we have year-round, Arctic-wide data, we’re gaining wholly new insights into interactions between the atmosphere and ocean,” says Krumpen. In addition, the outcomes are of considerable value for shipping in the Arctic, as well as future weather and climate forecasts: “Using the new satellite data, we are finally able to make sea ice forecasts informed by the ice thickness, not only for the winter, but also for the summer. This will reduce safety risks for ships and fishing,” says Landy. “We can also predict whether there will be ice or not at a given location in September, by measuring the ice thickness in May.” According to co-author Professor Michel Tsamados from University College London, the new data could not only improve short-term weather forecasts for the middle latitudes, but also long-term climate projections.