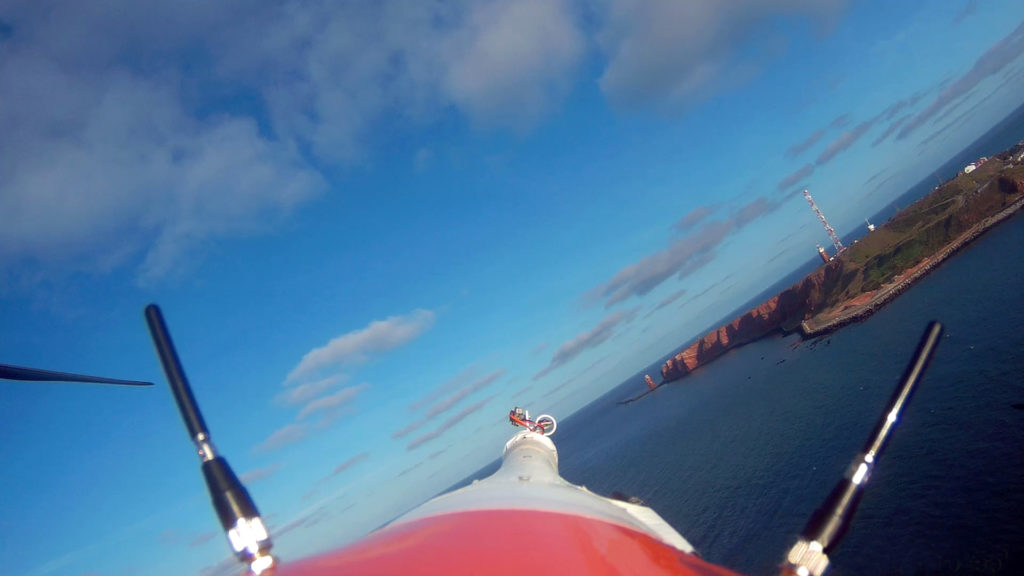 One pillar for the energy transition is offshore wind energy. When wind farms are erected, they influence the wind currents over the sea. For this purpose, meteorological measurement data were collected to investigate changes as well as effects of further wind farm expansion. An application example where the use of an unmanned aerial vehicle provides valuable insights. What sounds simple involves a great deal of expertise, as each flight requires extensive approval procedures to ensure a high level of safety. With the Test Center for Maritime Technologies on Heligoland and vast flight experience, Fraunhofer IFAM, part of the Fraunhofer-Gesellschaft, a member of the DAM, closes this service gap for research and industry.

The German government’s plans for the energy transition call for renewable energies to cover at least 80 percent of electricity consumption by 2030. Offshore wind energy is a fundamental pillar here. Due to the limited usable area, offshore wind farms are built in groups, so-called clusters. As a result, the wind farms and the individual turbines influence each other. In the wind shadow behind the turbines, wake currents with lower wind speeds and stronger turbulence occur. The aim of the X-Wakes project coordinated by Fraunhofer IWES, funded by the German Federal Ministry for Economic Affairs and Climate Action BMWK, is to record changes in wind conditions for the operation of offshore wind farm clusters during large-scale expansion. To this end, various measurement methods are apllied to collect data that can be used as a basis for developing models for future expansion scenarios – an ideal mission for unmanned aerial systems.

Applied research with unmanned aerial systems on the high seas off Heligoland – planning, coordination and implementation

In order to measure the impact of large-scale offshore wind farm development on future wind conditions, scientists at Eberhard Karls University Tübingen collected meteorological data to validate the algorithms used to calculate wind data from satellite overflights with data measured in the field. With the support of Fraunhofer IFAM, an unmanned aerial system was used for this task. The institute took the lead in preparing the strategic planning for the two-week flight campaign.

“In order to achieve the required low flight altitudes for this project, as well as for efficiency reasons, we decided to use an unmanned aerial vehicle. Fraunhofer IFAM provided planning support for this large project in advance and took over the coordination on site on Heligoland. This included the joint development of the Concept of Operations (CONOPS) and the associated Specific Operational Risk Assessment (SORA). The corresponding emergency checklists were also defined together in detail in advance. We ourselves were thus able to concentrate more on the flying system, measurement data acquisition and flight mission,” explains Ines Weber, project manager and doctoral student at the University of Tübingen.

“The implementation of such flight campaigns involves a number of additional safety measures related to close operational agreements between the aeronautical authorities on site and the diverse users of the airspace in the German Bight. This begins with general aviation, rescue and naval aviators, the Federal Police, and extends to civil airfields and shipping. System redundancies, such as the dual camera system used here, or the use of redundant tracking or collision warning systems also play an important role,” reports Tim Strohbach, project manager in the department Quality Assurance and Cyber-Physical Systems at Fraunhofer IFAM. “During the measurement series, the unmanned aerial vehicle covered a distance of over 70 kilometers per mission. The maximum distance from the launch site was slightly more than 12 kilometers – i. e. completely out of sight. Most of the flight took place at an altitude of about 30 meters above sea level. Only during departure and approach, as well as over the adjacent nature reserve area, flights were conducted in higher altitudes in order to minimize disturbance to the flora and fauna. In addition, the Fraunhofer-Gesellschaft’s research vessel “Joseph von Fraunhofer” accompanied the aircraft during the initial flight phase to ensure a rapid response in the event of potential problems. The nature conservation association “Jordsand” was also on board to observe possible influences on seabirds,” says Strohbach, describing the project.

“Overall, we were able to carry out all flights without complications during the entire measurement campaign and record the relevant data smoothly. On this basis, we can now develop models for future expansion scenarios of offshore wind farms,” says Weber pleased with the results.