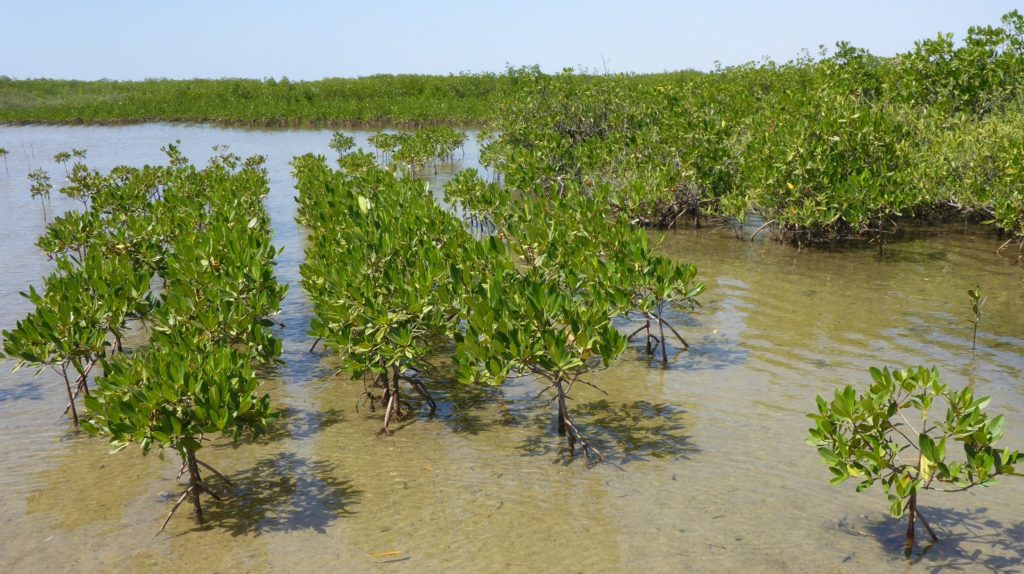 Although global efforts to protect mangroves as well as reforestation projects have achieved some success, and worldwide rates of loss have dropped from one to two percent to below 0.2% per year over the past three decades, researchers from the International Union for Conservation of Nature (IUCN) are concerned about mass planting of mangrove seedlings. The IUCN’s Mangrove Specialist Group has now summarised its concerns in a position paper titled “Pause before you plant” addressing decision-makers in politics, non-governmental organisations (NGOs) and the general public.

Among the mangrove experts from all over the world represented in the IUCN group is Professor Martin Zimmer, head of the working group Mangrove Ecology at the Leibniz Centre for Tropical Marine Research (ZMT). The scientist from Bremen explains what led him and his colleagues to make their comprehensive statement: “Within the IUCN mangrove expert group we have observed for some time and with increasing concern a kind of actionism that is often associated with mangrove planting. Of course it is welcome that something is being done to save mangrove forests, but unfortunately in the long-term many projects are not crowned with success.”

The researchers identify a number of reasons for failure: Often mangrove restoration projects are unsuccessful because important ecological conditions are not considered, especially in the case of mass planting. Mangroves are, for example, planted in locations that are exposed to strong currents, so the young seedlings that have not yet taken root are simply washed away.

Zimmer explains: “Mass planting is very media-effective, but often focus on only one or two species that are easy to plant. The results are populations that do not provide the desired ecosystem processes and services. Often, less stress-resistant monocultures are planted or species are introduced that are not indigenous, become invasive and can lead to ecological problems”.

With their position paper, the IUCN experts hope to draw attention to the issue without wanting to nip restoration efforts in the bud. “Nothing is further from our minds,” stresses Zimmer. “Our paper is intended to stimulate reflection. However, we like to encourage to take a step back before planning a reforestation project and to think about what exactly the goal of the whole project is, and how mangroves can be planted with success. Hence the title of the position paper ‘Pause before you plant’.”

Within the last three decades the worldwide loss rate of mangroves has dropped from one to two percent to 0.13% per year. Countries such as Sri Lanka and Indonesia are committed to protecting the remaining mangrove forests on their coasts. So why did the group of mangrove experts feel the need to issue their warning in light of this quite positive development?

Zimmer puts the figures into perspective: “Even though we are losing fewer mangroves than before, we are still losing around 20,000 hectares per year,” he says “In the past 50 years, more than a third of the world’s mangrove stocks have been deforested or destroyed.”

And what is the advice from the experts? “We recommend first and foremost to rely on the natural regenerative power of the mangroves. If we can restore the original environmental conditions, mangroves can develop on their own. In areas where this is not possible, or where special ecosystem services need be achieved, reforestation can be a solution, but only under the appropriate ecological conditions.”

It would be best, of course, if the mangroves were not cut down in the first place, says the Bremen researcher, because “old-grown mangrove stands are simply irreplaceable”.

About the topic: Mangroves bind large amounts of carbon dioxide and other greenhouse gases

Across an area of around 15 million hectares worldwide, mangrove forests grow in very special habitats. The approximately 80 different species that exist on Earth live in the tidal zone or at river mouths and can thrive in saltwater-saturated sediments with little oxygen ­– conditions that would be lethal for most plant species.

Mangrove forests play an important role for humans and animals. They bind large amounts of carbon dioxide and other greenhouse gases. Overall, researchers estimate that between four and 20 billion tons of carbon are stored in the tidal forests.

ZMT mangrove ecologist Martin Zimmer says: “As a cautious estimate one can say that on average mangroves store about two tons of carbon dioxide per hectare in one year – that is about the same amount that four cars emit. If you consider the worldwide mangrove population of 15 million hectares, mangroves worldwide bind on average about as much CO2 per year as all motor vehicles in Germany produce in the same period.”

Mangroves thus contribute significantly to climate protection. The tropical forests also provide coastal defences, they save the coasts from erosion by storm waves and are home to countless species of fish and crustaceans. However, mangrove forests around the world continue to be threatened by aquaculture, agriculture and urban development.