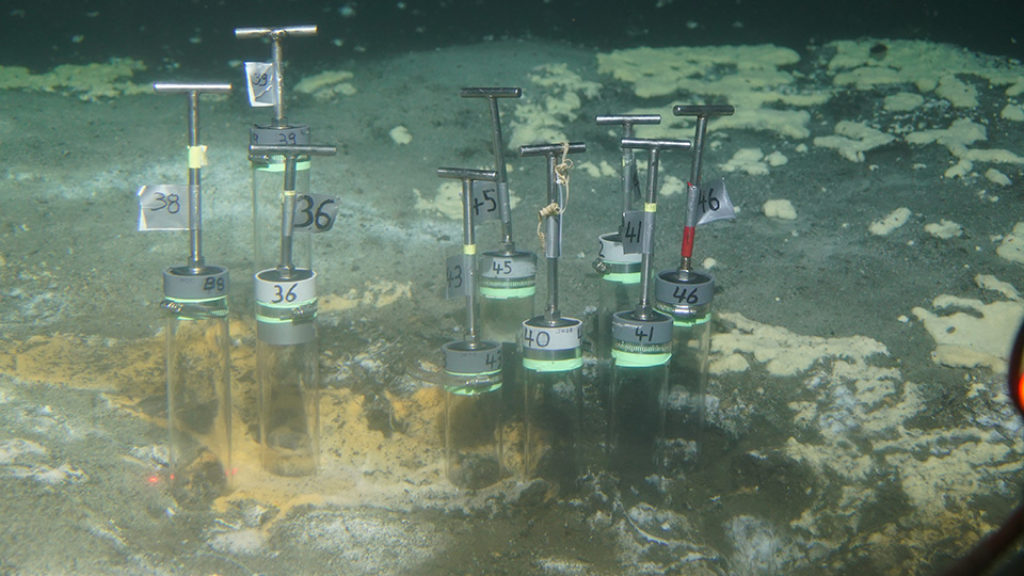 Carbon occurs on the Earth in a variety of structures and forms. Elemental Carbon is usually formed under conditions of high pressure and temperature. Researchers have now, for the first time, identified microorganisms that produce elemental carbon. The team, which includes Dr. Gunter Wegener of MARUM, the Center for Marine Environmental Sciences of the University of Bremen and the Max Planck Institute for Marine Microbiology in Bremen, both members of the DAM, has now published its results in the Journal Science Advances.

Life on the Earth is based on carbon. Through the course of evolution, living organisms have learned to form and process large numbers of different carbon compounds. Carbon is the cornerstone of most biologically produced organic compounds such as proteins, carbohydrates, fats and DNA. All of these compounds contain, in addition to carbon, many other elements, including hydrogen, nitrogen and oxygen.

Elemental carbon is formed from organic carbon compounds in the Earth without biological influence when high temperature and pressure conditions expel all of the other elements such as hydrogen and nitrogen. For example, wood deep underground first becomes coal under high temperatures, then with increasing pressure and temperature, forms with very high carbon content like anthracite and graphite are formed. These are crystalline forms of carbon. When wood, gas or oil is burned, soot is formed that consists mostly of an amorphous form of carbon. It was previously not known that living organisms themselves can also produce elemental carbon.

For more than 15 years, the Bremen scientist Dr. Gunter Wegener has been cultivating microorganisms that consume methane without oxygen to produce the energy they need. These are archaea that live in symbiosis with bacterial partners. Not much energy can be obtained from this process for either partner, so the consortia grow with doubling times of several months, which is a very long time for microorganisms. The researchers noticed some time ago that the microbial consortia were unusually dark, almost black. At an early stage, a portion of this black mass had already been described as metal sulfides. These are formed from iron that is added to the culture medium and the sulfide produced by the partner bacteria.

Wegener’s colleagues, Dr. Kylie Allen and Prof. Robert White from Virginia Tech (USA), are always searching for new biomolecules and their functions. As a part of their efforts, they extracted methane-oxidizing cultures from the specimens in Gunter Wegener’s laboratory using organic solvents. A residue of black material was left behind that could not be dissolved by strong acids or bases. “At first we had no idea what this black mass could be,” explains Robert White. “Then we used other methods to analyze the material as a solid phase and found that it was almost pure carbon. This existed in a highly disordered form known as amorphous carbon.” Where did this elemental carbon come from? The team ruled out the possibility of a pure chemical origin. They then fed the culture with isotopically labeled carbon, which can be tracked in the breakdown process, and analyzed the carbon formed. “We were thus able to prove that the methane-oxidizing archaea were indeed responsible for the formation of elemental carbon,” says Gunter Wegener.

Next, the researchers investigated the methane-forming, or methanogenic archaea, which are closely related to the methane oxidizers. “Although not to the same degree, many of these groups also produced elemental carbon,” says Robert White.

The study, however, is now generating more questions than answers. For example, how is this carbon formed? The formation of elemental carbon normally requires high pressures and temperatures. Both were absent in the cultures. “This kind of formation of elemental carbon by organisms is completely new to science. There must be reactions going on in archaea that were previously completely unknown,” explains Kylie Allen, the principal author of the study. “We still do not know at all what biochemical reactions and enzymes are at work here.”

The question of ‘why’ has also not yet been explained. “Elemental carbon is a good electrical conductor. Carbon may be the key to the symbiosis between the archaea and their partners,” speculates Gunter Wegener. Electrical charges could be transported optimally via carbon-based compounds. It is also completely unknown how much elemental carbon is formed by microorganisms in nature. “Because the carbon is deposited in sediments and remains there over very long time frames, our results could also imply a heretofore unknown natural carbon sink.” The team will now begin to tackle the unanswered questions, in part within the framework of the Cluster of Excellence “The Ocean Floor – Earth’s Uncharted Interface”, which is housed at MARUM.

Header image: Sampling from the hot sediments of the hydrothermal seep at the Guaymas Basin off the coast of Mexico. The methane-oxidizing consortia live underneath the whitish-yellow and orange-colored bacterial mats. Photo: Andreas Teske, Univ. of North Carolina (USA).