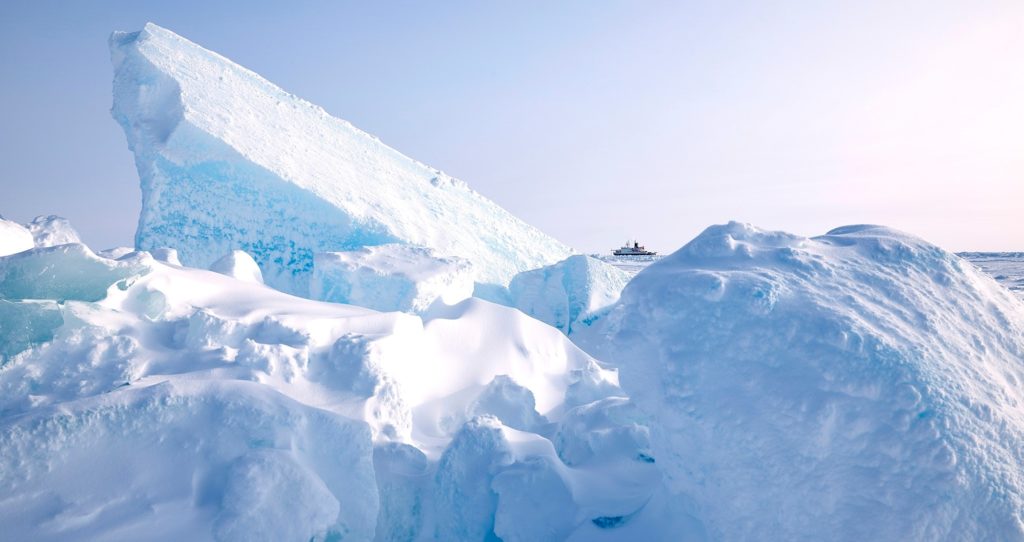 The extraordinary journey lasted for more than a year, 389 days to be exact. During the MOSAiC expedition, the research vessel POLARSTERN travelled north to the edge of the Arctic sea ice with the goal of becoming frozen into the ice, drifting in direction of the North Pole during the polar winter and unlocking the secrets of this largely explored environment. Researchers from 20 nations investigated climate change and the diverse interactions between the Arctic Ocean, sea ice and the atmosphere. A research camp was set up on an ice floe adjacent to the ship. “It is our intention to explain the scientific significance of this unique expedition and also show the beauty and vulnerability of the Arctic environment as it is being transformed by climate change. A more detailed special exhibition about the MOSAiC expedition is planned for 2023 after the modernisation of the MEERESMUSEUM,” explains Dr Dorit Liebers-Helbig, curator of the exhibition at the MEERESMUSEUM, a member of the German Marine Research Alliance (Deutsche Allianz Meeresforschung, DAM).

Esther Horvath from the Alfred Wegener Institute, Helmholtz Centre for Polar and Marine Research in Bremerhaven was one of several photographers chosen to accompany researchers during the course of the expedition. All photographers were challenged to capture the complexities of polar research under extremely difficult conditions. The photographs on display at the OZEANEUM Stralsund provide insights into the details of scientific research: What instruments were used? How were the instruments employed under polar conditions? What measurements were made and what samples were taken?

The video of the opening of the exhibition premiered on YouTube on 16 April 2021 at 8 pm and features museum director Dr Harald Benke and curator Dr Dorit Liebers-Helbig, together with Marc Brasse. Marc Brasse, editor of the NDR documentary film “Expedition Arktis. Ein Jahr. Ein Schiff. Im Eis.”, comments “I think the film and the photographs do more than just document the expedition. They are testimonies of a dying ecosystem and I very much hope that those in charge will draw the right conclusions from these documents and scientific results.”

The photo exhibition is currently open to museum visitors from 9:30 am to 6 pm daily (admission is included in the museum ticket). The new exhibition was developed in cooperation with the Alfred Wegener Institute in Bremerhaven, also a member of the DAM, and is located beside the OZEANEUM’s largest aquarium.

MOSAiC = Multidisciplinary drifting Observatory for the Study of Arctic Climate