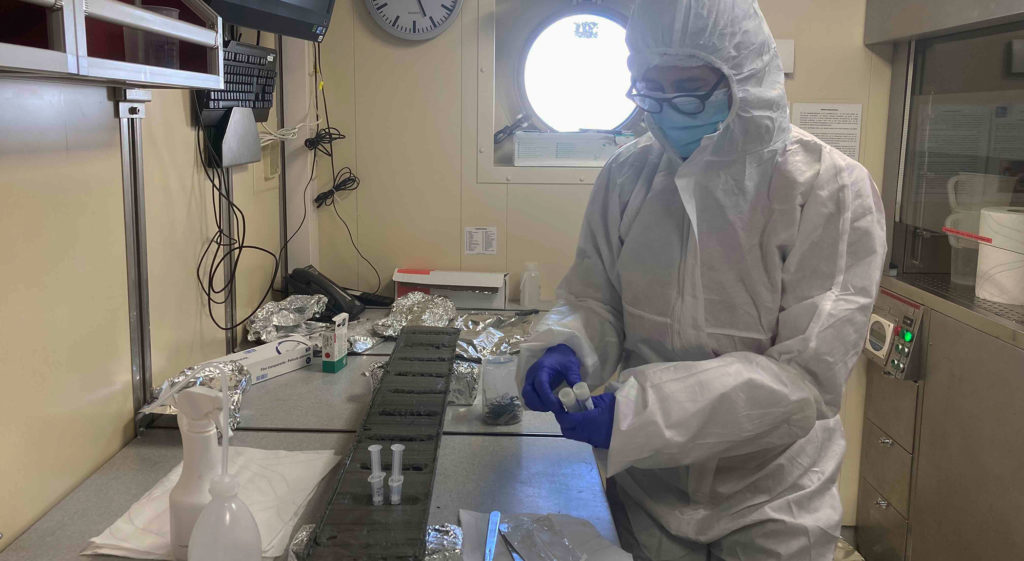 Climate change threatens marine biodiversity and thereby the stability of entire marine ecosystems. For phytoplankton, the photosynthetic microorganisms at the base of the aquatic food webs, the impact of these changes can already be detected. By using state-of-the-art palaeoecology and biodiversity research methods, the PHYTOARK research network, launched on May 1 and led by the Leibniz Institute for Baltic Sea Research Warnemünde (IOW), a member of the German Marine Research Alliance (Deutsche Allianz Meeresforschung, DAM), will look back into 8,000 years of phytoplankton history archived in Baltic Sea sediments, to reconstruct responses to past changes of the environment due to climate fluctuations. The insights will be used to improve the assessment of impacts of present and future climate change.

“We are at the beginning of a fascinating research project, in which we are using traces of the past, such as ancient DNA, and even revive organisms that have been dormant in sediments for centuries, to develop robust scenarios for future changes” says Dr. Anke Kremp, commenting on the start of the project.

The IOW phytoplankton ecologist heads the international PHYTOARK network funded for three years with a total budget of 1 million Euros by the Leibniz Association as part of the Leibniz competition. Nine other research institutions from Germany, Finland, Sweden and the US participate, including the Senckenberg Biodiversity and Climate Research Centre Frankfurt and the Universities of Hamburg and Konstanz as principal partners.

The core idea of PHYTOARK is that the Baltic Sea sediments store traces of the past like an archive. These can be reliably dated and thus allow conclusions about the structure and function of phytoplankton communities from different periods and the corresponding environmental conditions. “The 8,000 years of the Baltic Sea history we plan to investigate, include several warm periods – natural climate fluctuations – with warming on a scale comparable to today’s man-made climate change,” Kremp explains. “We want to understand how the phytoplankton responded to these changes and use this information for computer-based simulations of the function of future phytoplankton,” says the IOW expert.

These results, in turn, will be used for assessing climate change impacts on the entire Baltic Sea ecosystem. “Changes happening at the base of the food web will propagate to higher levels – for example fish stocks,” Kremp explains. This is why the HELCOM (Helsinki Commission for the Protection of the Baltic Sea) is involved as a partner in the PHYTOARK network. The plan is to jointly develop an assessment framework for todays’s and future climate change impacts using climate-induced variability of phytoplankton diversity and function of the past as a reference.

Practical preparations for the project started already in April, when members of the PHYTOARK team, including geologists, phytoplankton ecologists and ancient DNA experts, collected samples during an expedition with the IOW research vessel ELISABETH MANN BORGESE. “We took sediment cores and water samples from different locations in the central Baltic Sea and the Gulf of Finland that will provide the base material for the many different analyses we have planned,” says Anke Kremp, describing the first steps.

To reconstruct the Baltic Sea phytoplankton and the environmental conditions of times long past, PHYTOARK relies on a novel multidisciplinary approach that combines state-of-the-art palaeo-environmental and biodiversity research with experimental plankton ecology and ecosystem modelling.

To generate DNA time series, the genetic information of all the organisms whose remains have been deposited over the millennia, so-called environmental DNA, will be extracted and analysed from the various layers of the sediment cores. “This allows us to draw conclusions about diversity changes in phytoplankton communities over long periods of time and to evaluate functional consequences” explains Kremp.

Furthermore, PHYTOARK wants to use palaeogenomics, the reconstruction of ancient genomes of certain key species, to find out how climate-related environmental changes have led to evolutionary adaptations. Particularly exciting in this context, says Kremp, are the studies on species that can be revived from old sediment layers: Many plankton species form resting stages to survive unfavourable conditions in the water column. Like seeds of plants, these can remain alive for long periods of time and become active organisms again. Plankton revived from such “seeds” in century-old sediments can be compared to present-day populations to reveal adaptations. “This sounds a bit like Jurassic Park, even though the phytoplankton we work with, of course does not originate from dinosaur times,” says the phytoplankton ecologist.

By analysing various organic and inorganic sediment components, so-called palaeo-environmental proxies, it is possible to draw conclusions about past salinity, oxygen and temperature conditions, thus making the PHYTOARK reconstruction of the Baltic Sea’s past complete.

“In PHYTOARK, we are, for the first time, bringing together all the expertise in one network that is needed for such holistic research on planktonic diversity and climate change in the Baltic Sea’s past. The application of our findings to ecological assessment of the Baltic Sea’s future also makes our approach new and promising,” concludes Anke Kremp.

Leibniz Competition, funding line “Cooperative Excellence”
In the Leibniz Competition, Leibniz institutions compete directly for research funding. In this way, the Leibniz Association aims to create additional incentives for research at the highest level. Less than 30 % of all applications are funded. The “Cooperative Excellence” program of the competition, which funds the PHYTOARK network, specifically supports projects that are particularly innovative and can only be successful through the collaboration of excellent partners – including institutions outside the Leibniz Association.