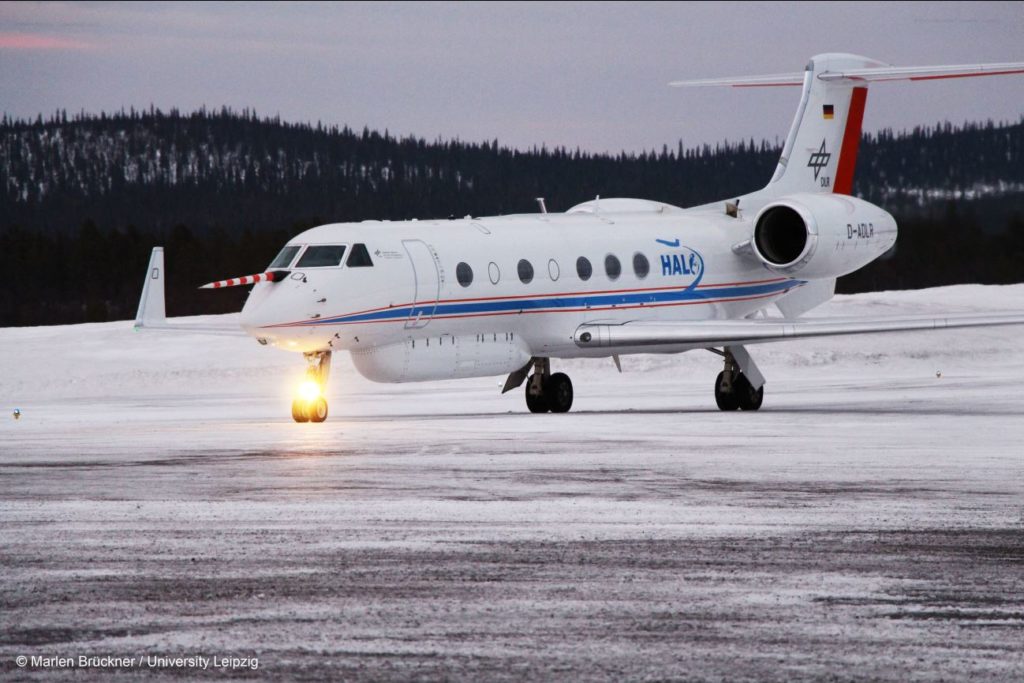 In mid-March 2022, the large-scale international HALO-(AC)³ research campaign will begin investigating transformations of air masses in the Arctic. Three German aircraft will be deployed, scientists from the UK and France will also be involved during joint flights with two further aircraft. The team of researchers will be focusing particularly on northwards-flowing warm air reaching into the central Arctic, which are often called warm air intrusions. The counterpart, cold air outbreaks with southwards-moving cold air from the Arctic, will also be investigated. The goal is to investigate the processes causing the above-average increase in temperatures in the Arctic during the last decades.HALO arriving at Kiruna airport, Sweden. HALO-(AC)³ campaign March 2022.Credit: Dr. Marlen Brückner/Leipzig University

At two to three degrees Celsius over the last 50 years, this increase is much larger than the warming that has taken place in other regions on Earth. This phenomenon is referred to as Arctic amplification. The effects of this increase in temperature are not limited to the climate system in the Arctic, but are suspected to modify the regional weather in the mid-latitudes, as well. Thus, the HALO-(AC)3-Campaign aims to contribute to a better understanding of the processes behind the dramatic climate changes that are currently taking place in the Arctic. During the first measuring flights since 12 March 2022 a massive warm air intrusion into the Arctic has been observed. At this event, several unusual phenomena have been detected, such as heavy rain over sea ice and massive clouds, reaching almost as high as in the tropics. With the arrival today of further research aircraft, planned coordinated measurement flights will begin on 19 March 2022, to better understand the complexity of these events.

Manfred Wendisch from the Institute for Meteorology at Leipzig University is the scientific coordinator of the five-week HALO-(AC)3 measuring campaign, which will study changes in air masses on their way into and out of the Arctic. What exactly happens to these air masses, particularly with regard to cloud formation, will be observed in detail using state-of-the art instruments. These changes to air masses cannot be characterized by local, ground-based instruments, as there are only a limited number of meteorological measurement stations in the central Arctic region. For this reason, three measurement aircraft will be applied as part of HALO-(AC)3 to observe the changes of the air masses on their way into and out of the Arctic. The researchers aim to determine changes to the air masses using a quasi-Lagrangian observation method. In this technique, each flight pattern is adapted to the direction of movement of the relevant air mass, allowing changes to clouds, humidity, temperature and many other parameters to be measured directly. The data obtained in this way will be used to assess the accuracy of numerical weather forecasting models, which are necessary for predicting the future changes of the Arctic climate. Thus, the campaign will help to close an important gap in climate research knowledge, which was identified by the Intergovernmental Panel on Climate Change (IPCC) in the second part of its latest assessment report.

Manfred Wendisch summarises the goal of HALO-(AC)3 as follows: “Predicting the future of the Arctic climate remains a challenge. We want to carry out an extensive flight campaign – HALO-(AC)3 – that uses innovative observation methods to help reduce major uncertainties in the projection of future climate development in the Arctic.”

Three German research aircraft will be used to perform measurements for HALO-(AC)3. The first is HALO (High-Altitude and Long-Range Research Aircraft), a modern research aircraft operated by the German Aerospace Center (Deutsches Zentrum für Luft- und Raumfahrt; DLR). “HALO will operate at higher altitudes as a remote sensing platform, as it is capable of covering distances of up to 10,000 kilometres at altitudes of up to 15 kilometres,” explains Andreas Minikin of the DLR Flight Experiments facility. Meanwhile, in tandem with HALO, the Polar 5 and Polar 6 aircraft will conduct detailed measurements of the air masses at lower altitudes. The two polar aircraft have been used in the Arctic for more than 10 years under the direction of the Alfred Wegener Institute, Helmholtz Centre for Polar and Marine Research (AWI). Covering distances of between 1500 and 2000 kilometres, they will complement HALO by conducting measurements at altitude ranges below six kilometres. Andreas Herber, an AWI researcher and the coordinator for Polar 5 and Polar 6, adds: “Although the polar aircraft have a shorter range, they have the major advantage of being able to fly ‘low and slow’, so they can capture snapshots of very specific processes taking place in, below and above clouds, and in the planetary boundary layer.”

The aircraft are equipped with state-of-the-art instrumentation that can survey the entire atmosphere from the ground up to an altitude of 10 kilometres. The most important measurement parameters include cloud properties, temperature and humidity profiles, energy fluxes and the properties of aerosol particles and trace gases. Susanne Crewell, an atmospheric researcher at the University of Cologne, explains: “By coordinating the flight patterns of the three aircraft, we can track the air masses as they evolve in space and time. These measurements make it possible to take a closer look at the smallest cloud structures, all the way down to individual cloud particles, and to investigate the effect of Arctic sea ice on cloud properties. By combining various measurements, we will be able to obtain an almost complete picture of the air masses under investigation.” Important tools for this are what are referred to as ‘dropsondes’, which are released from the aircraft and descend to the ground on small parachutes. As they descend through the atmosphere, they acquire measurements of temperature, air pressure and humidity.

From Leipzig, scientists from the Leipzig Institute for Meteorology (LIM) of the University of Leipzig and the Leibniz Institute for Tropospheric Research (TROPOS) are on site. The LIM team is focused on observing cloud properties and related effects on the energy transfer between the surface, the atmosphere, and the clouds. Therefore, the Leipzig researchers have installed similar spectral sensors and camera systems on HALO and Polar 5. These instruments will help to closely track the life cycle of clouds during air mass transport. “It will then be very exciting to see how well our models reproduce these changes,” says André Ehrlich, who is coordinating the HALO mission from the Leipzig side.

TROPOS, in close cooperation with AWI and the Max Planck Institute for Chemistry in Mainz, is engaged in activities to characterize aerosol particles and cloud particle residuals on board of Polar 6. “Of special interest here are the spatial distribution and physicochemical properties of aerosol particles in general and particles contributing to the formation and freezing of cloud droplets in particular. For this purpose, a new set of instruments developed at TROPOS for in-situ aerosol characterization as well as the Virtual Countercurrent Impactor, which has already been successfully used in previous measurement campaigns, will be applied”, explains Frank Stratmann, the head of the TROPOS cloud group.

In parallel with the aircraft measurements, TROPOS  and the Leipzig University will conduct profile measurements using a tethered balloon at the AWI-research station AWIPEV near Ny-Ålesund on Svalbard. In addition to meteorological measurements, small-scale exchange processes, radiation and aerosol parameters will also be examined from the ground up to a height of one kilometre. A first set of these measurements were collected in autumn 2021 during the transition to the polar night and will now be repeated at the transition to the polar day, to link ongoing ground measurements with aircraft measurements. The extensive data set acquired by the HALO-(AC)3 campaign will be enhanced by measurements from ground-based remote sensing instruments at the AWIPEV research station, together with the latest satellite remote sensing methods and state-of-the-art numerical climate models.

When and where will measurements be conducted?

The HALO research aircraft will be based in Kiruna, Sweden, from 11 March to 15 April 2022. The Polar 5 and Polar 6 polar aircraft will operate out of Longyearbyen, Svalbard, between 19 March and 13 April 2022. The aircraft measurements will focus on an area in the northern Arctic Ocean, in the Fram Strait, and around Svalbard (78 degrees north, 16 degrees east). Balloon measurements at the AWIPEV station are also planned over an additional period of approximately eight weeks between mid-March and mid-May 2022.

Who are the partners involved?

HALO-(AC)3 is a joint research campaign by Leipzig University, the Alfred Wegener Institute, Helmholtz Centre for Polar and Marine Research, the Leibniz Institute for Tropospheric Research, the Max Planck Institute for Meteorology and Chemistry, Ludwig-Maximilians-Universität Munich and the universities of Bremen, Hamburg, Cologne and Mainz, together with international partners. More than 100 scientists from 12 countries will take part in this research project. HALO-(AC)3 combines the research on “Arctic Amplification” within the infrastructure priority program on the scientific use of HALO and the Transregional Collaborative Research Centre (AC)3 (ArctiC Amplification: Climate Relevant Atmospheric and SurfaCe Processes and Feedback Mechanisms). Both of these major projects are funded by the German Research Foundation (Deutsche Forschungsgemeinschaft; DFG).

Since 12 March 2022, HALO already performed a series of very successful research flights from Kiruna over the Norwegian and the Greenland Sea as well as the Fram Strait to the North Pole. A massive warm air intrusion into the Arctic has been investigated and so far, several unusual phenomena have been observed during these flights, for example, heavy rain over sea ice. This might have serious implications on a possible early melting of the sea ice, and this in the mid of March. Furthermore, massive clouds have been observed, reaching almost as high as in the tropics. Surface temperatures in the Fram Strait have been more than 20 degrees Celsius higher during the current flights than expected from the long-term records. It is not just the intensity of the currently observed warm air intrusion, but also the duration, which seems unusual. During Tuesday and Wednesday of this week further moisture transport into the Arctic has been observed, which is called “Atmospheric River”, likely causing record precipitation and even more warming of the entire Arctic. There are indications from forecast products that the sea ice will be seriously disturbed by this massive warming event. The scientists on site are truly excited to witness further major events and hope to be able to follow them further on in the days to come. As the polar aircraft will arrive at Svalbard on 18 March 2022 coordinated measurement flights could then be all the more valuable to better understand the complexities of these events.

The High Altitude and Long Range (HALO) research aircraft is a joint initiative of German environmental and climate research institutions. HALO is supported by grants from the Federal Ministry of Education and Research (BMBF), the German Research Foundation (DFG), the Helmholtz Association of German Research Centres, the Max Planck Society (MPG), the Leibniz Association, the Free State of Bavaria, the Karlsruhe Institute of Technology (KIT), the Forschungszentrum Jülich and the German Aerospace Center (DLR).

About Polar 5 and Polar 6

The Alfred Wegener Institute, Helmholtz Centre for Polar and Marine Research (AWI) conducts research in often inaccessible, ice-covered areas of the Arctic and Antarctic. Research aircraft are absolutely indispensable for carrying out such work. The two Basler BT-67 aircraft, Polar 5 and Polar 6, are specially equipped for flights in the extreme environmental conditions of the polar regions. The planes can take off and land on hard runways, unmade airstrips and snowbound surfaces, using a combined undercarriage fitted with both wheels and skis. De-icing systems, heating elements for the batteries and engines, and advanced navigation systems can even allow them to fly blind and perform landings in very difficult weather conditions and at temperatures as low as minus 54 degrees Celsius.