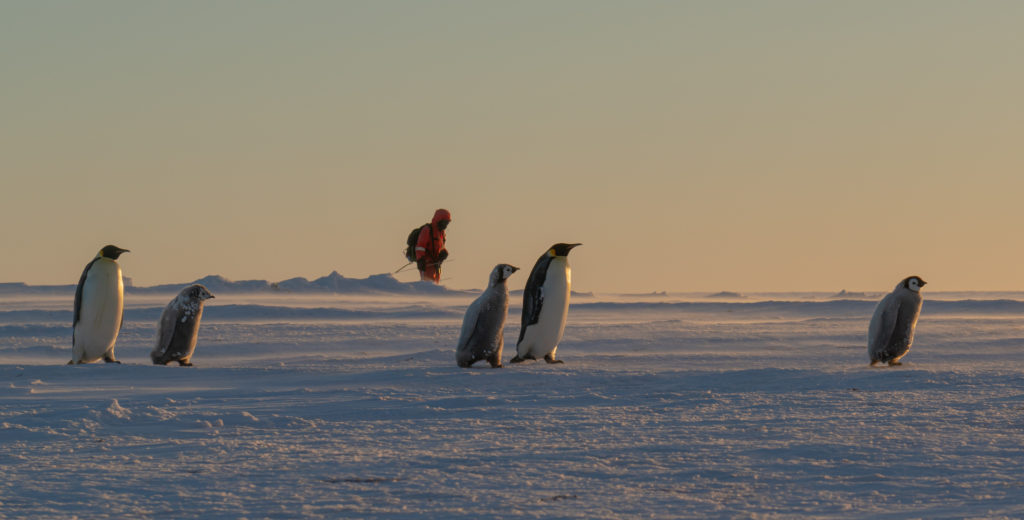 Before they reach the age of one, young emperor penguins from Atka Bay, near the German Neumayer Station III in the Antarctic, swim far north, beyond the 50th parallel south. Consequently, the current and planned Marine Protected Areas fail to offer them sufficient protection, as researchers including experts from the Alfred Wegener Institute, a member of the DAM, contend in a study just released in the journal Royal Society Open Science.

In addition to being the species most often associated with the Antarctic, emperor penguins play a vital ecological role in the food web of the Southern Ocean. Given that the latter is increasingly under pressure from climate change and intense fishing, marine protected areas and fishing regulations have been put into place. When it comes to managing current protected areas and determining catch limits, the respective commissions involved draw in part on the population and distribution of emperor penguins. To date, the available data has largely been based on observations of adult penguins. But in order for a species to survive, suitable conditions must be offered for all of its life phases.

An international team of researchers recently investigated how far north emperor penguins migrate. In January 2019 (Antarctic summer) they fitted eight young penguins with transmitters which, from that point on, relayed their positioning data via satellite six times a day. These juveniles were born in the southern winter of 2018 at the emperor penguin colony in Atka Bay, near Neumayer Station III, a German research station operated by the Alfred Wegener Institute, Helmholtz Centre for Polar and Marine Research (AWI). The emperor penguins were roughly six months old when they were tagged, an age at which they were moulting from fluffy light-grey chicks into their hallmark tuxedos.

The surprising finding, derived from their recorded swimming routes: during the Antarctic winter (August), all of the juveniles traveled beyond the Extent of Occurrence (EOO): the distribution range established for the species by the International Union for Conservation of Nature (IUCN). In fact, some of the tagged emperor penguins ventured up to 1,260 kilometres even from the proposed protected areas, demonstrating that emperor penguins in this life stage would be insufficiently protected if the swimming behaviour of adults were used as the basis for defining protected areas. A comparison with further scientific studies on young emperor penguins from colonies elsewhere in the Southern Ocean revealed that these penguins’ regular areas of presence were also predominantly outside any specially protected area.

Accordingly, the researchers’ findings show that the EOO defined by the IUCN for emperor penguins needs to be expanded to reflect the species’ actual distribution range. The current and planned marine protected areas (MPAs) are still too small, as they cover only 10 ± 5% of the estimated distribution range on average. In terms of how much time was spent in the protected areas, many young emperor penguins from the Atka Bay colony, located within the proposed MPA in the Weddell Sea (WSMPA, the largest MPA currently being considered for the Southern Ocean), left the MPA after just nine days (± 4 days) in January and spent only 10.6 ± 7.5% of their time in it. It was only in summer (January and December) that the juveniles spent an appreciable percentage of their time within the borders of the proposed WSMPA (48 ± 24% / 31 ± 13%). In February and from July to November, not one of the tagged penguins could be found there. “Our data clearly shows that strategic plans for protecting the emperor penguin and other long-lived, ecologically important species need to bear in mind the dynamic distribution ranges of all age groups. At this year’s meeting of the Antarctic Treaty System signatories in Berlin, various countries voiced their support for declaring the emperor penguin a specially protected species. Our data shows just how important this special protection could be,” concludes Prof Olaf Eisen, scientific chair of AWI’s Antarctic research infrastructures and a co-author of the current study.