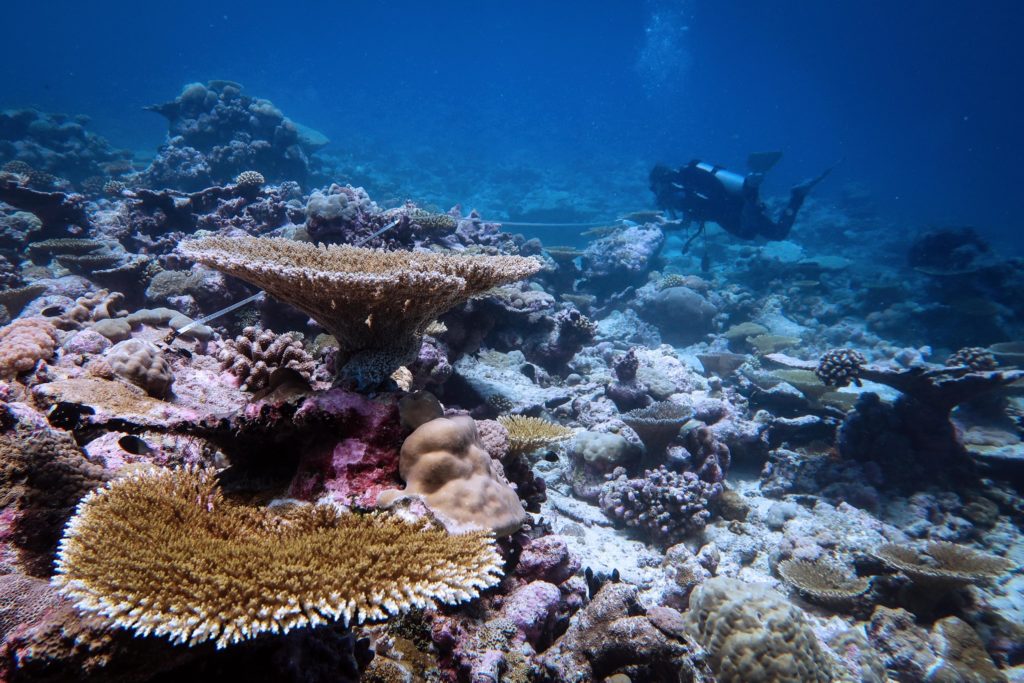 How quickly do coral reefs and their geological and ecological functions recover after a mass mortality caused by coral bleaching? A new study quantifies changes in coral communities and size structure in the remote Chagos Archipelago following the 2015/2016 global bleaching event. Located in the middle of the Indian Ocean, the archipelago’s northern atolls have been uninhabited for decades and are part of one of the world’s largest marine protected areas. Their coral reefs are therefore exposed to minimal direct human impact such as fishing or pollution from land.

Coral bleaching occurs during marine heat waves and can cause large-scale community changes in the reef due to widespread coral mortality. It thus affects the important functions of reefs. While coral reef damage has been extensively studied in recent decades, critical knowledge gaps remain about how quickly reefs and their functions can recover after disturbances and what traits improve reef resilience.

In their study, researchers from the University of Exeter and the Leibniz Centre for Tropical Marine Research (ZMT) investigated reef carbonate budgets of twelve reefs across the Chagos Archipelago in 2015, 2018 and 2021. Reef budget states describe the balance between production and erosion of calcium carbonate, the building material of coral skeletons. Carbonate budgets are thus important indicators of reef health and their ability to provide habitat for marine life, protect shorelines from wave energy, and help reef islands keep pace with sea level rise.

The field study initially showed that coral bleaching in 2015 and 2016 had reduced coral cover and carbonate production by over 70% in the studied reefs through the death of bleached corals. Therefore, in 2018, the formerly healthy reefs had shrunk significantly as erosion processes outpaced new coral growth.

However, when the researchers returned in 2021, six years after the bleaching event, all of the reefs were on the road to recovery. In one of the atolls, Salomon Atoll, the carbonate budget was clearly positive again and the major coral species had returned in high numbers. Reefs in the other two atolls were also regenerating, but at a slower rate.

“Because of the surprisingly rapid return of many different coral species, we expect that the reefs in the Chagos Archipelago are likely to recover fully over the next few years, at least if the region is spared further coral bleaching,” says Ines Lange, a coral reef ecologist at the University of Exeter and lead author of the study.

The scientists were able to identify several factors that contributed to the faster recovery of the reefs in Salomon Atoll: These reefs retained their complex structure even after the mass die-off, providing more habitat for coral recruitment. The returning coral species also influenced recovery speed, and Salomon’s reefs experienced a rapid return of fast-growing table corals. The proximity to a protected lagoon with healthy coral communities had likely allowed them to re-establish more quickly on outer reefs.

“The study shows that coral reefs and the important functions they perform can recover relatively quickly in remote and protected areas without local impacts such as fisheries, sewage or shoreline changes, even after large-scale disturbances,” said co-author Marleen Stuhr of the ZMT. “Such regions can serve as a model to observe the natural course of reef recovery.” Understanding the processes that drive reef community regeneration is particularly important for protecting reefs under increasing global threats.