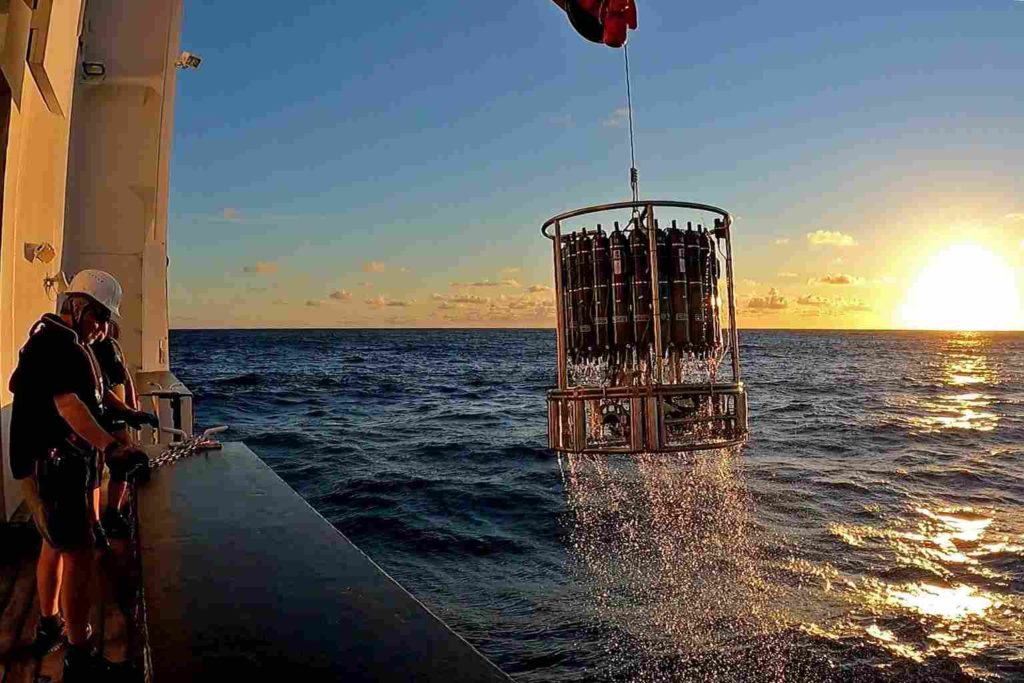 15.03.2022/Kiel/Bremen. Iron-rich fluids emanating from hydrothermal vents on the seafloor can boost life in the otherwise nutrient-poor surface waters of the open ocean. An expedition with the German research vessel SONNE is currently traversing the South Pacific and collecting data on the supply of nutrients and trace elements as well as the resulting plankton productivity. With its measurements, the multinational team led by GEOMAR Helmholtz Centre for Ocean Research Kiel in cooperation with Jacobs University Bremen also wants to learn more about the possibilities and limits of carbon dioxide absorption in the ocean.

The South Pacific is one of the most remote and least explored ocean regions on our planet. It is also the largest ocean region with extremely low productivity: its crystal clear, blue waters indicate a very low abundance of phytoplankton. These microscopic plants live on the ocean surface and depend on nutrients such as nitrates and trace elements like iron and cobalt to grow. Therefore, their low abundance in the South Pacific is thought to be due to a scarce supply of these elements. Low productivity also limits the uptake of atmospheric carbon dioxide (CO2) in this part of the ocean. Hydrothermal vents on the seafloor provide nutrients to the deep water, which further begs the question of whether these nutrients also reach the surface of this ocean desert. Such vents have now been located and sampled.

For expedition SO289, the German research vessel SONNE is currently traversing the South Pacific Ocean at 32.5°S from Valparaiso (Chile) to Noumea (New Caledonia), a distance of 6500 nautical miles. The seven-week cruise is funded by the German Federal Ministry of Education and Research (BMBF) and takes place within the international GEOTRACES program. Led by GEOMAR Helmholtz Centre for Ocean Research Kiel and in cooperation with Jacobs University, scientists from the Universities of Kiel, Marseille, Lausanne, Xiamen, Minnesota, South Florida and Vienna, the Alfred Wegener Institute (AWI), the Royal Netherlands Institute for Ocean Research (NIOZ), the Swiss Federal Institute of Technology (ETH) Zurich, Memorial University of Newfoundland and the University of Chile are also involved. The collaboration of national and international research groups and the many different nationalities on board create an inspiring multicultural environment.

Researchers aboard SONNE are studying the influx of trace elements and nutrients to the surface ocean and their effects on sea surface productivity, nitrogen fixation by phytoplankton, and carbon uptake in the ocean. In addition, the sources, sinks, and distributions of trace elements and their isotopes (TEIs) in the water column along this zonal section in the South Pacific are determined in detail. Sources of trace elements include Chilean and Australian dust, rivers such as the Maipo in Chile, sediments on the continental shelf, and hydrothermal vents in the deep ocean.

The South Pacific harbors large underwater volcanoes and hydrothermal vents along the East Pacific Ridge in the middle of the ocean between diverging tectonic plates from which magma rises from the Earth’s mantle. Hot fluids flow from the vents into the deep sea at a water depth of about 2500 meters. They contain high concentrations of iron and other elements needed by phytoplankton for growth. The iron plumes are thought to be transported southward at depth and reach surface waters in the Southern Ocean, the largest region of the world ocean where phytoplankton growth is limited by iron. Researchers are assessing hydrothermal iron inputs and using tracers and modeling approaches to determine their impact on Southern Ocean productivity.

In recent days, plumes of hydrothermal vents have been located and sampled on the East Pacific Rise, north of the Juan Fernandez microplate. “The region is known for its hydrothermal vents, and we were very excited to find them,” said Professor Dr. Eric Achterberg, marine biogeochemist at GEOMAR and cruise leader for the expedition. The team on board detected a very distinct plume in the signal from the turbidity sensor, which measures particle concentration in the water column. In situ water pumps brought iron-rich particles ejected from hydrothermal vents 2200 meters below the surface aboard the research vessel. “This suggests that there are indeed oases in this marine desert – but we need to analyze our samples in more detail to better understand the effects of these nutrient surges.”

Expedition members also collect detailed water and particle samples from the surface to the seafloor on a daily basis. This will involve the use of specialized equipment and GEOTRACES-approved sampling and analysis methods to sample trace metals in a way that avoids contamination from the instruments and the ship. In addition, the uptake of atmospheric CO2 by the ocean will be measured, the abundance of microplastics in the surface ocean will be assessed, and growth experiments will be conducted on phytoplankton with a range of added metals and nutrients. This is done to determine which metals and nutrients are present in the ocean in insufficient amounts for optimal phytoplankton growth. “We anticipate that our results will be of global importance in understanding the chemical environment in which ecosystems operate and how ocean productivity and the role of the oceans in atmospheric carbon uptake will change in a future warmer ocean,” Professor Achterberg concluded.