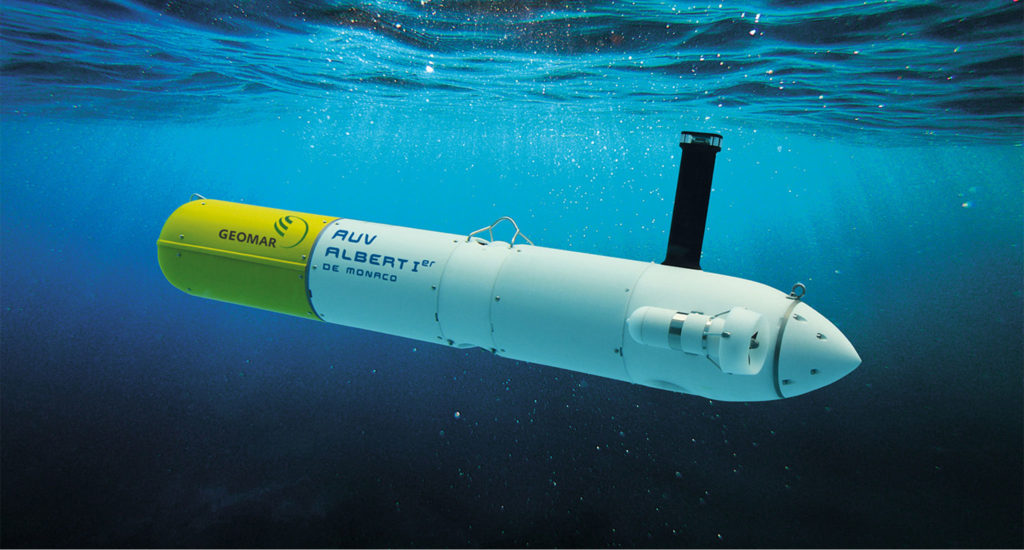 Kiel. For more than 100 years, the Principality of Monaco and Kiel have been closely connected in the field of marine research. At the beginning of the 20th century, Prince Albert I of Monaco and the Kiel marine researcher Otto Krümmel jointly designed international research projects in the Mediterranean. As an expression of the long-standing and close ties, H.S.H. Prince Albert II of Monaco today christened the new autonomous underwater vehicle “Albert I. de Monaco” at GEOMAR Helmholtz Centre for Ocean Research Kiel.

Prince Albert I of Monaco was a regular and fond visitor of the Kiel Week, as well as a pioneer of marine research. More than 100 years ago, he established a close connection between Kiel and the Principality of Monaco: He invited Professor Otto Krümmel, marine scientist from Kiel, to his newly opened Oceanographic Museum. Together with experts from Italy, Spain and France, they designed a strategy for the exploration of the Mediterranean – the nucleus for the Scientific Commission of the Mediterranean (Commission Internationale pour l’ Exploration Scientifique de la Méditerranée, CIESM).

GEOMAR Helmholtz Centre for Ocean Research Kiel, a member of the German Marine research Alliance (DAM), has been cooperating with various scientific institutions from the Principality of Monaco for several years. In 2016, H.S.H. Prince Albert II of Monaco received the German Ocean Award at the 41st CIESM Congress in Kiel for his commitment to researching, preserving and protecting the oceans. In 2017, he visited the new Ocean Science Centre Mindelo of GEOMAR on Cape Verde to present the “Monaco Explorations Campaign”, which was supported by researchers from Kiel.

In commemoration of the long-standing relationship between his home country and the Northern German city, H.S.H. Prince Albert II of Monaco christened a new Autonomous Underwater Vehicle (AUV) with the name of his great-great-grandfather “AUV Albert I. de Monaco” at GEOMAR today.

“We find, at the heart of the ceremony which unites us today, the same faith in science, in its promises of progress, in its capacity to change the destiny of mankind and that of the Planet”, said H.S.H. Prince Albert II. “This Autonomous Underwater Vehicle Albert I of Monaco is, I believe, the incarnation of this.”

The AUV “Albert I de Monaco” was built by IQUA Robotics in Spain. It is a about 1.5 metres long and can dive up to 200 metres deep. Being equipped with various sensors, including a side-scan sonar and an oxygen sensor, the device can be used both for measurements in the open water and for seafloor mapping – and thus reflects the diverse research interests of its namesake. “With the new vehicle, we want to support research projects near the coast in particular, but also pursue technology development”, explains Marcel Rothenbeck, head of the AUV team at GEOMAR.

“It is a great honour for us to welcome His Serene Highness Prince Albert II for the christening ceremony”, says Professor Dr. Katja Matthes, Director of GEOMAR. “We would like to further strengthen the cooperation with the Principality of Monaco, which began more than 100 years ago. We are united by our knowledge that humans are changing the ocean in an unprecedented way – with consequences for our own lives and those of future generations.” The ocean is getting warmer, more acidic, and is losing oxygen”, Matthes continued. “But the ocean also helps us to fight climate change. This is addressed by GEOMAR research, and this is where new opportunities arise for the cooperation with the Principality of Monaco.”

“The state of Schleswig-Holstein supports marine research here in Kiel, but also at other locations on the North Sea and the Elbe River. We are proud of this research area and the international recognition we receive for it”, says Karin Prien, Minister for Education, Science and Culture of the State of Schleswig-Holstein. “At the same time, we are working together more closely than ever at the national level in Germany to bring more attention to marine research and its topics. Two years ago, we founded the German Alliance for Marine Research together with the federal government and four other northern German states – GEOMAR is one of them. With this alliance, we want to apply the excellent scientific work in German marine research in a more targeted way to solve pressing social problems.”

Another guest on this occasion was the German sailing sportsman Boris Herrmann, whose racing yacht “Seaexplorer” collected data for science during his participation in the single-handed regatta Vendée Globe. The visitors watched a visualisation of his track in the “Arena II”, a visualisation laboratory of the Kiel marine sciences at GEOMAR.