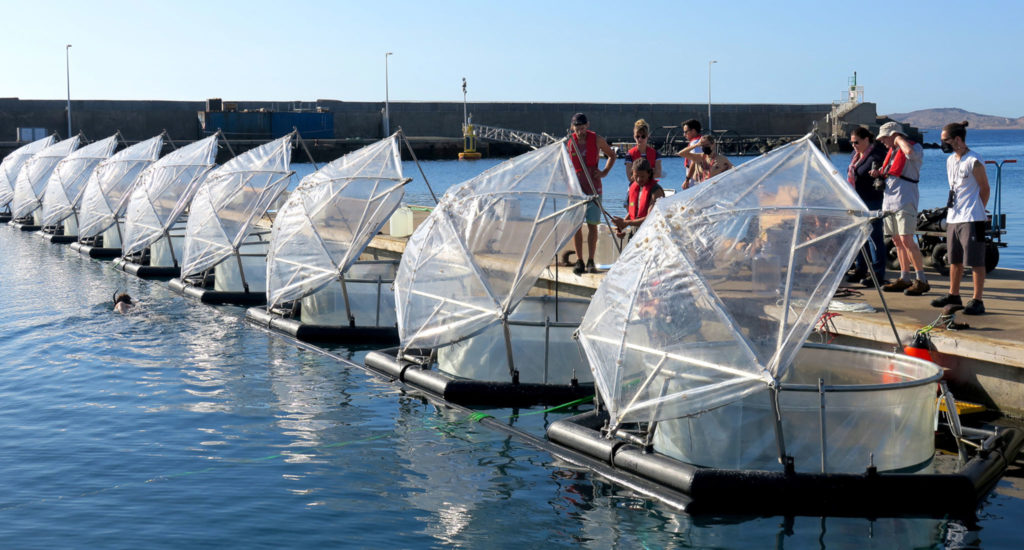 Making the ocean an ally in climate protection

17.09.2021/Kiel/Gran Canaria. In a field experiment just starting on Gran Canaria, scientists from six nations led by GEOMAR Helmholtz Centre for Ocean Research Kiel, a member of the German Marine Research Alliance (DAM), are investigating to what extent the ocean can help absorb more carbon dioxide (CO2) from the air and what impacts this has on marine life. The experiment is taking place as part of the EU project Ocean-based Negative Emission Technologies (OceanNETs). The project, which has been running since July 2020, aims to provide an integrated assessment of targeted measures for CO2 removal in the ocean.

The human-induced increase in carbon dioxide (CO2) concentration in the atmosphere continues. With well-known consequences: The climate is changing, extreme weather events are increasing in many places, with sometimes dramatic effects on humans and nature. According to current estimates by the Intergovernmental Panel on Climate Change (IPCC), the goal of limiting global warming to as close to 1.5° Celsius as possible decided in the Paris Agreement, can no longer be achieved without active removal of CO2. The Ocean-based Negative Emission Technologies (OceanNETs) project, funded by the European Union and coordinated at GEOMAR Helmholtz Centre for Ocean Research Kiel, is investigating to what extent ocean-based approaches could contribute to achieving this goal.

In the long term, most of the carbon dioxide (CO2) released by humans will be recaptured by the weathering of rocks on land and stored in the ocean as dissolved bicarbonate. However, it will take up to ten thousand years for the human CO2 footprint to be largely wiped out again via this process. Too long to play a significant role in addressing climate change in the coming decades. Unless this process could be actively accelerated. Whether this is possible and how the marine communities react to it is currently being investigated by 50 scientists from six nations under the leadership of GEOMAR in a field experiment on Gran Canaria.

In oversized test tubes, so-called mesocosms, deployed in on-shore waters the researchers are simulating accelerated weathering through the addition of minerals, as they are also introduced into the oceans through natural weathering of rocks. For every kilogram of dissolved rock minerals, this approach can bind about half a kilogram of additional CO2 in the seawater. In the nine mesocosms, different amounts of minerals were added with the corresponding amount of CO2. The concentration gradient set in this way should provide information about possible thresholds for the environmental compatibility of accelerated weathering. In addition to the long-term storage of CO2 in the seawater, the approach known as ocean alkalinisation has the co-benefit of counteracting ocean acidification. The on-going acidification of seawater is a consequence of continued CO2 emissions. About a quarter of the CO2 released annually by humans dissolves in the ocean and reacts with the water to form carbonic acid – with serious consequences for marine life.

“The goal of our field experiment is to investigate the potential risks and side effects of ocean alkalinisation on marine communities, but also to capture any positive effects by curbing ocean acidification”, explains Prof. Ulf Riebesell, marine biologist at GEOMAR Helmholtz Centre for Ocean Research Kiel and head of the study. “In addition, we hope to gain insights into how effectively and safely ocean alkalinisation could be used as a method of CO2 removal.”

The marine ecosystem off Gran Canaria is representative of large areas of the subtropical open ocean. Therefore, Riebesell and his team, supported by researchers from other European and non-European institutions, will deploy the Kiel mesocosms off the Norwegian coast and repeat the study there next spring. “In contrast to the nutrient-poor subtropical ocean around the Canary Islands, the nearshore ecosystems off Norway are nutrient-rich and highly productive. By comparing two contrasting ecosystem types, we can better assess the range of potential impacts of ocean alkalinisation on marine life.”

The results of the studies will be incorporated into an overarching assessment of all ocean-based measures for active CO2 removal. “The OceanNETs project combines the expertise of scientists from the natural sciences, engineering, economics, sociology and the law of the sea”, says Dr. David Keller, Earth system modeller at GEOMAR and coordinator of the OceanNETs project. “The results and assessments we hope to obtain will help to provide a basis for decision-making on the possible use of CO2 removal strategies. Which measures will ultimately be used can only be decided by weighing up all the advantages and disadvantages and integrated into a whole-society process to mitigate climate change.”

The contribution that ocean alkalinisation can make to this process will now be investigated for the first time on open ocean natural communities in the field experiment off Gran Canaria.

In addition to the “OceanNETs” project, which is funded under the Horizon 2020 programme of the European Commission, the study on Gran Canaria is co-funded by the EU project “AQUACOSM-plus” and the project “Ocean Carbon Dioxide Removal” (Ocean-CDR) of the Helmholtz Association.