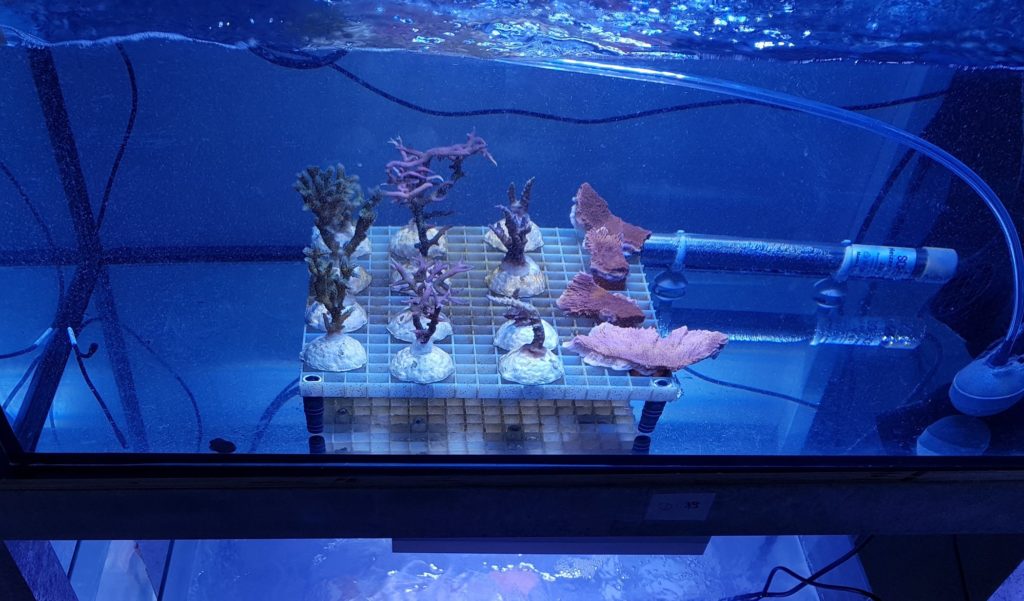 How plastic affects life in the ocean is one of the pressing questions in marine research. A new study by the Leibniz Centre for Tropical Marine Research (ZMT), a member of the German Marine Research Alliance (Deutsche Allianz Meeresforschung, DAM), looks at the impact of microplastics on corals.

Microplastic particles are 5 mm and smaller. They are formed in the ocean as plastic waste decomposes through friction, salt, bacteria or UV radiation. Another source that has received little attention to date is paints and varnishes from ships, which leave behind considerable amounts of chipped plastic particles in their wake. But the tiny plastic particles are also added to many industrially manufactured products, such as cosmetics or detergents, and enter the sea through wastewater.

Today, microplastics can be found almost everywhere in the ocean, from tidal flats to deep-sea trenches, from tropical coral reefs to Arctic sea ice. Every year, according to the International Union for Conservation of Nature (IUCN), close to 1.5 million tons of microplastics enter the oceans – in addition to an estimated five to twelve million tons of macroplastics.

It is well known that marine animals and birds can become entangled in plastic nets or swallow plastic waste. But are the tiny plastic particles also a danger to the fauna? The polyps of corals, for example, feed on organic particles, among other things, which they capture with their tentacles. The question arises as to whether they also take in plastic fragments in this way, which then cannot be degraded.

At the ZMT, members of Prof. Dr. Hildegard Westphal’s research group investigated the contamination of corals with microplastics. In the ZMT’s seawater facility, they placed specimens of four different stony coral species during five months in a tank enriched with tiny plastic particles for one day every two weeks. They then prepared specially stained thin sections of the coral specimens and examined them under light and scanning electron microscopes.

The experiments showed that coral polyps can recognize the foreign bodies as such and excrete them again. However, they also revealed that the plastic particles had not found their way out of the oral cavity in all cases. In about one third of the thin sections examined, one or more particles were found directly at the transition to the coral calcium skeleton, or they were already incorporated there.

With the help of the thin sections, the researchers were able to reconstruct how the microparticles enter the skeleton. “It is possible that the plastic particles release toxins such as plasticizers in the digestive tract of the polyps, or that mechanical irritation occurs that their tissue cannot tolerate,” suspects geologist Florian Hierl, lead author of the study. Around the foreign body, the tissue dies and pushes the particle toward the calcareous skeleton that the polyps of the stony corals excrete at their base. Over time, more calcium carbonate deposits overgrow the foreign body until it is cemented into the skeleton.

To his surprise, Hierl also found tiny plastic fibers in the coral’s calcium carbonate skeleton, which had not been added to the water in the experiment. Small fiber fragments from synthetic textiles that are released during washing are among the most important sources of microplastics. They can be washed into the ocean with sewage. “Presumably, the fibers have contaminated the sea salt that we add to the water at our plant,” Hierl said. “Microscopic plastic particles are found almost everywhere in our environment.”

The calcium carbonate of stony corals and other reef organisms is the basis for the structure and stability of tropical coral reefs and many neighbouring islands and coasts. “We can’t yet say what exactly such contaminants do to the skeleton of corals,” Hierl says. “It is possible that they affect the vitality of the corals and the robustness of their skeletons. An unstable coral skeleton can then cause the coral to break more easily during strong waves or storms.”

And last but not least, the plastic parts of the corals can also get into the food chain, for example through parrotfish, which nibble the calcium carbonate skeleton of corals with their beak-like mouths. These fish are regularly on the menu, especially in Southeast Asian countries.