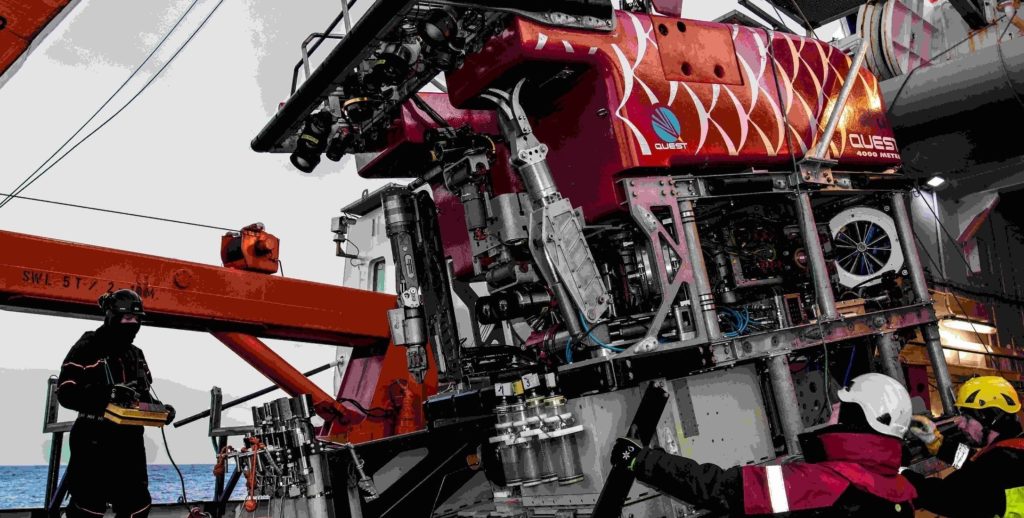 The Ocean between Picasso and Monet. Marine scientists in the World’s largest digital museum. In more than 20 online exhibitions, an international team of scientists takes the visitors to an expedition on the internet platform Google Arts & Culture, led by Chief Scientist Prof. Dr. Gerhard Bohrmann from MARUM – Center for Marine Environmental Sciences at the University of Bremen. Dive to the seafloor. Discover the Ocean.

With extraordinary photographs, 360 degree images, videos, interviews and reports, the expedition of the research vessel POLARSTERN takes us to the waters around South Georgia and the South Sandwich Volcanic Islands. The mission: Exploring the ocean’s floor in the Antarctic waters to investigate hot and cold vents, because little is known about the seabed in this difficult-to-access area. Marine geologist Gerhard Bohrmann and his international team have already conducted three research expeditions to this very rough and stormy region. A premiere this time: During the trip with the research icebreaker POLARSTERN, which is the focus of the “Into the Deep” project, the scientists deployed the remotely operated vehicle MARUM-QUEST in Antarctic waters and to visually survey the ocean’s floor, gather critical data and take samples for future studies.

Huge chimneys rise from the bottom of the sea and serve as conduits for the outflow of fluids hotter than 300 degree Celsius that meet the cold sea water as they discharge into the ocean. In this critical interface, metal sulfides and oxides are formed and are visible as plumes of dark particles. Because of this spectacular discharge, these sites are known as Black Smokers. “We were able to explore unique chemosynthetic living ecosystems. The organisms living at these locations evolved to use a unique metabolism, whereby they derive energy from chemical substances coming from the seafloor instead of relying on the photosynthetic systems that depend on sunlight, which we know from life onshore”, Bohrmann says. Google Arts & Culture provides access to those so-called hydrothermal fields and also shows how difficult it was for the expedition team to collect samples such as sediment cores under icy temperatures and winds up to Beaufort 12.

Chief scientist Gerhard Bohrmann says about the project: “For us as scientists, it is always very interesting when our research is approached from different perspectives, which is why the collaboration with the Google Arts & Culture team was exciting. Above all, I was particularly pleased that the artist Christopher von Deylen showcasted our expedition in a video and used his voice to guide us through the POLARSTERN on our 360-degree tours. ”

Another premiere during this expedition: The telepresence that was specially set up for scientists on land to participate in real-time in each dive and to contribute their expertise as research was conducted on the seafloor. “During our cruise, this telepresence was successfully used for the first time on a German research vessel. Colleagues from all over the world joined in and contributed to the success of each dive. We also used this telepresence capability for public outreach, enabling students of the Wilhelmsburg District School in Hamburg to ask us their questions live during the dives. I was highly impressed by how well the students, who accompanied our trip from the classroom for seven weeks, were prepared and how well they dealt with our research topics,” says Bohrmann. Under the focus “Future Education. Sharing Science” the exchange with schools found its place on the Google Arts & Culture page.

The “Into the Deep” project was initiated, organized and supported by photographer and exhibition curator Holger von Neuhoff and author Stephanie von Neuhoff. Both of them have been documenting the work of marine scientists in exhibitions, books and online projects for more than 20 years. They say: “The largest stage in the world is the ocean. It is our aim to open it up again and again to a wide audience. We have always accompanied Gerhard Bohrmann and his team in the spirit of Alexander von Humboldt, who once wrote to his friend Goethe: Nature must be felt. Today we have to ask ourselves: How can we feel nature in our digitized world? And how can we create networks that allow us to grasp the big picture in the permanent data stream? These questions ultimately led to the collaboration with Google Arts & Culture, which allow us to present science among the world’s greatest museums on the occasion of the World Ocean Day. ”

Google Arts & Culture works with more than 2,000 cultural organizations from over 84 countries. The free online platform or mobile application for Android and iOS makes it possible to explore the world’s treasures online. For this purpose, Google Arts & Culture provides cultural institutions with technology such as gigapixel photography or augmented reality so that they can present their collections online to a broad audience. Google Arts & Culture contains more than 200,000 works of art, over six million photos, videos, manuscripts and documents on topics related to art, culture, history and science. “With the new online exhibition, we can now look behind the scenes of the research vessel POLARSTERN and accompany the scientists on their special journey – even to the depths of the sea,” Simon Rein, Program Manager for Google Arts & Culture, explains. “Google Arts & Culture enables free access to art, culture and science worldwide. We are delighted to unveil ‘Into the Deep’ to celebrate World Oceans Day with MARUM and Germany’s Federal Ministry of Education and Research.”

“The impressive and emotional presentation of marine research down to the deep sea opens up new insights for all interested parties in previously unknown areas of our planet – with a successful combination of the latest marine technology with the online capacities of Google Arts & Culture“, summarizes the chairman of the German Marine Research Consortium and Director of the Leibniz Institute for Baltic Sea Research Warnemünde, Prof. Dr. Ulrich Bathmann.

The online project is supported by the Federal Ministry of Education and Research (BMBF) and presented on the BMBF project page at Google Arts & Culture.

Links:
“Into the Deep” for the UN World Ocean Day on June 8, 2020
Expedition site at MARUM