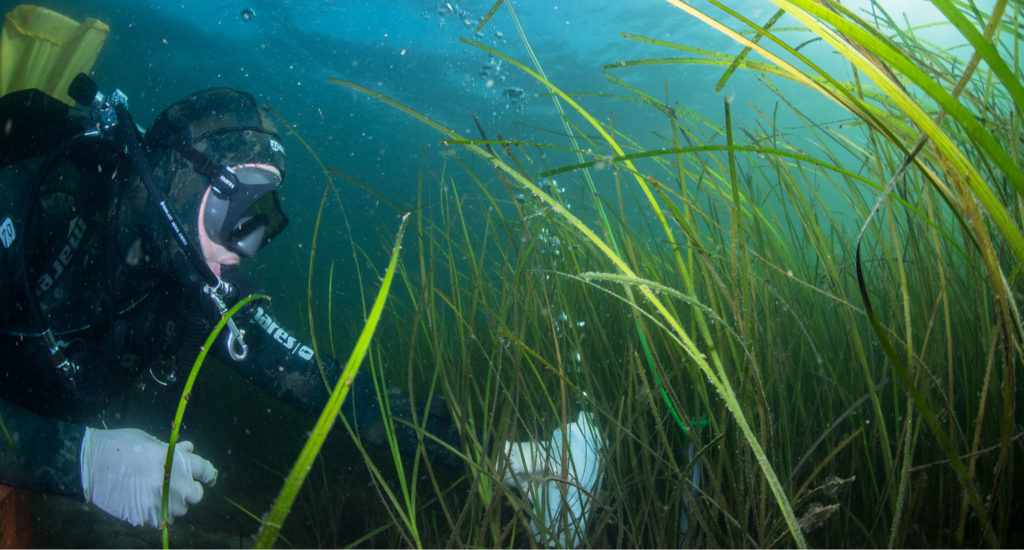 Kiel researchers prove another service of the Baltic Sea ecosystem

Kiel. Seagrass meadows help mitigate climate change and prevent algal blooms. According to recent research results, they are also able to reduce concentrations of potentially harmful bacteria in seawater: A study now published by researchers from Kiel draws attention this additional ecosystem service that seagrass meadows provide to humans. The findings provide yet another reason for the protection and restoration of these long-underrated ecosystems in the German Baltic Sea.

It has been known for some time that seagrass meadows absorb nutrients and are thus able to prevent over-fertilization and algal blooms. In addition, their important role as a marine carbon sink is also increasingly being recognized, which means they can minimise the greenhouse effect. In a study now published in the journal Marine Biology, a team of researchers from GEOMAR Helmholtz Centre for Ocean Research Kiel, a member of the German Marine Research Alliance (DAM), demonstrates that native seagrass meadows can also improve water quality with respect to potentially harmful bacteria: Water from the densely vegetated submarine areas contains fewer vibrios – naturally occurring bacteria that can be harmful to health in high concentrations.

At five locations in the Bay of Kiel, divers collected water samples from overgrown and non-vegetated sandy bottoms. In the laboratory, these were placed on a plate prepared with a nutrient solution. After a few days the Vibrio colonies that formed were counted. The analyses showed that water from seagrass beds contained an average of 39 percent fewer vibrios and 63 percent fewer of the potentially harmful Vibrio vulnificus/cholerae type compared to non-vegetated areas.

The underlying mechanism will be studied in more detail in the future. “It is plausible that the increased sedimentation in the dense meadow increases the settling of fine particles, to which vibrions also adhere,” explains Professor Thorsten Reusch, marine biologist at GEOMAR and leader of the study. “But it could also be that chemical substances from the seagrass leaves prevent the growth of the bacteria.”

“Our pilot study was motivated by a 2017 Science publication that showed a reduction of coral and human pathogens for tropical meadows wherever dense seagrass meadows grow between human settlements and reefs,” Prof. Thorsten Reusch adds. “Now we have been able to demonstrate similar functions of our native waters for the first time.”

The new results are of particular importance because all climate models predict above-average warming in the future in combination with a sweetening of the Baltic Sea. “These are exactly the environmental conditions that will lead to the further spread of vibrios also on beaches used for swimming in summer,” said Professor Ute Hentschel Humeida, microbiologist at GEOMAR and co-author of the publication. The study also highlights the crucial importance of seagrass beds as a nature-based solution for the health of shallow water ecosystems and their water quality. Thus, it provides further incentives for the protection and restoration of these long underestimated coastal ecosystems.