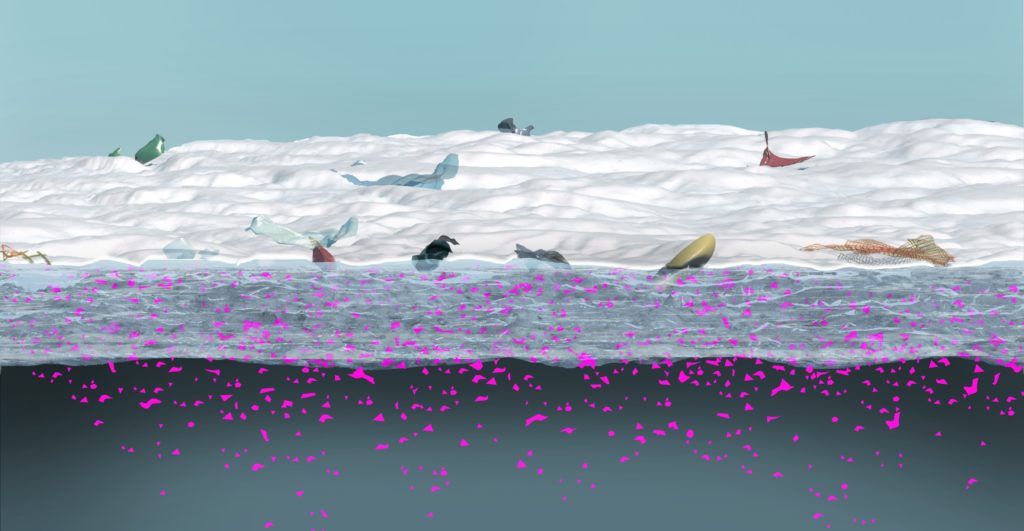 A new AWI-led study shows: there is now a concerning degree of plastic pollution in the Arctic Ocean

Even the High North can’t escape the global threat of plastic pollution. An international review study just released by the Alfred Wegener Institute, a member of the DAM, shows, the flood of plastic has reached all spheres of the Arctic: large quantities of plastic – transported by rivers, the air and shipping- can now be found in the Arctic Ocean. High concentrations of microplastic can be found in the water, on the seafloor, remote beaches, in rivers, and even in ice and snow. The plastic is not only a burden for ecosystems; it could also worsen climate change. The study was just released in the journal Nature Reviews Earth & Environment.

The numbers speak for themselves. Today, between 19 and 23 million metric tons of plastic litter per year end up in the waters of the world – that’s two truckloads per minute. Since plastic is also very stable, it accumulates in the oceans, where it gradually breaks down into ever smaller pieces – from macro- to micro- and nanoplastic and can even enter the human bloodstream. And the flood of debris is bound to get worse: global plastic production is expected to double by 2045.

The consequences are serious. Today, virtually all marine organisms investigated – from plankton to sperm whales – come into contact with plastic debris and microplastic. And this applies to all areas of the world’s oceans – from tropical beaches to the deepest oceanic trenches. As the study published by the Alfred Wegener Institute, Helmholtz Centre for Polar and Marine Research (AWI) now shows, the High North is no exception. “The Arctic is still assumed to be a largely untouched wilderness,” says AWI expert Dr Melanie Bergmann. “In our review, which we jointly conducted with colleagues from Norway, Canada and the Netherlands, we show that this perception no longer reflects the reality. Our northernmost ecosystems are already particularly hard hit by climate change. This is now exacerbated by plastic pollution. And our own research has shown that the pollution continues to worsen.”

The article paints a grim picture. Although the Arctic is sparsely populated, in virtually all habitats – from beaches and the water column, to the seafloor – it shows a similar level of plastic pollution as densely populated regions around the globe. The pollution stems from both local and distant sources. Especially ocean currents from the Atlantic and the North Sea, and from the North Pacific over the Bering Strait, contribute to this. Tiny microplastic particles are also carried northward by wind. Then there are the rivers: though the Arctic Ocean makes up only one percent of the total volume of the world’s oceans, it receives more than 10 percent of the global water discharge from rivers, which carry plastic into the ocean, for example, from Siberia. When seawater off the coast of Siberia freezes in the autumn, suspended microplastic becomes trapped in the ice. The Transpolar Drift transports the ice floes to Fram Strait between Greenland and Svalbard, where it melts in the summer, releasing its plastic cargo.

Some of the most important local sources of pollution are municipal waste and wastewater from Arctic communities and plastic debris from ships – especially fishing vessels, whose nets and ropes pose a serious problem. Either intentionally dumped in the ocean or unintentionally lost, they account for a large share of the plastic debris in the European sector of the Arctic: On one beach on Svalbard, almost 100 percent of the plastic mass washed ashore came from fisheries according to an AWI study.

“Unfortunately, there are very few studies on the effects of the plastic on marine organisms in the Arctic,” Bergmann explains. “But there is evidence that the consequences there are similar to those in better-studied regions: in the Arctic, too, many animals – polar bears, seals, reindeer and seabirds – become entangled in plastic and die. In the Arctic, too, unintentionally ingested microplastic likely leads to reduced growth and reproduction, to physiological stress and inflammations in the tissues of marine animals, and even runs in the blood of humans.”

The available data on potential feedback effects between plastic debris and climate change is particularly thin. “Here, there is an urgent need for further research,” says the AWI expert. “Initial studies indicate that trapped microplastic changes the characteristics of sea ice and snow.” For example, dark particles could mean the ice absorbs more sunlight and therefore melts more rapidly. In turn, due to what is known as ice-albedo feedback this can intensify global warming. Moreover, plastic particles in the atmosphere provide condensation nuclei for clouds and rain, which means they could influence the weather and, in the long term, the climate. And last but not least, throughout their lifecycle, plastics are currently responsible for 4.5 percent of global greenhouse-gas emissions.

“Our review shows that the levels of plastic pollution in the Arctic match those of other regions around the world. This concurs with model simulations that predict an additional accumulation zone in the Arctic,” says Bergmann. “But the consequences might be even more serious. As climate change progresses, the Arctic is warming three times faster than the rest of the world. Consequently, the plastic flood is hitting ecosystems that are already seriously strained. The resolution for a global plastic treaty, passed at the UN Environment Assembly this February, is an important first step. In the course of the negotiations over the next two years, effective, legally binding measures must be adopted including reduction targets in plastic production. In this regard, the European countries including Germany must cut their plastic output, just as the rich Arctic States have to reduce pollution from local sources and improve the often virtually non-existent waste and wastewater management in their communities. In addition, more regulation and controls are called for – with regard to plastic debris from international shipping, and fisheries.”

Header-Image: Detail drawing from the AWI infographic: How does litter enter the sea? Here: sea ice as a sink for microplastics. It binds the particles as long as the ice is frozen. Foto: AWI / Martin Künsting