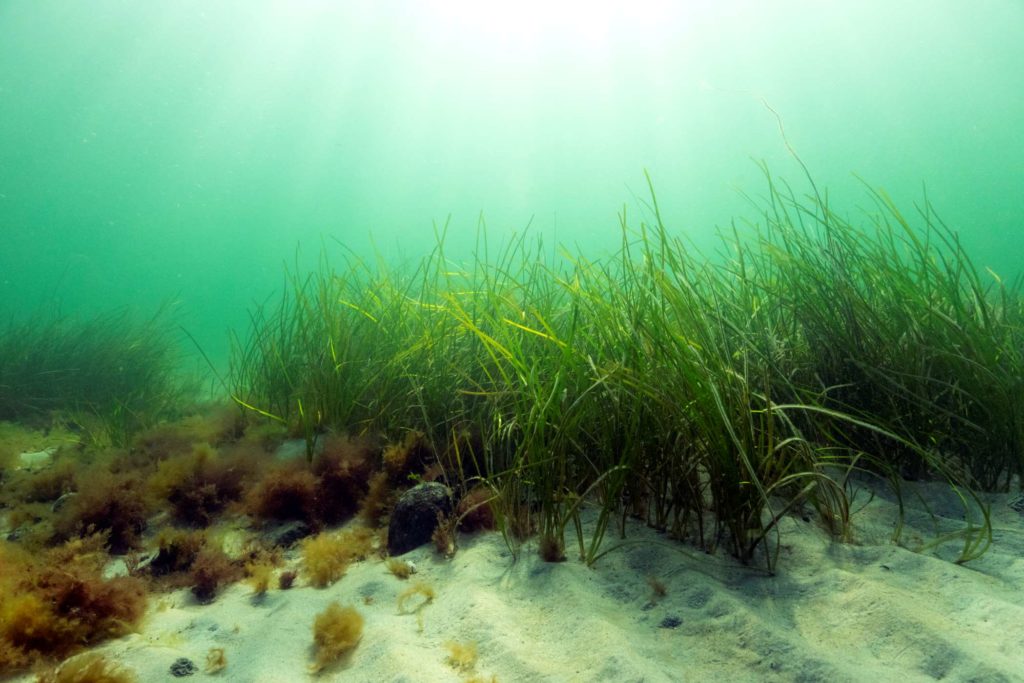 Can nature-based methods mitigate the potential threat in the Baltic Sea?

Vibrio bacteria, including species that are harmful to humans, are a natural component of Baltic Sea plankton. As a consequence of climate change, they may become more common due to rising water temperatures and thus an increasing health risk. The BaltVib project, coordinated by the Leibniz Institute for Baltic Sea Research Warnemünde (IOW), a member of the German Marine Research Alliance (DAM), is investigating whether certain plant and animal communities such as seagrass and mussel beds naturally reduce near shore Vibrio abundance and how this effect can be supported through actively shaping the marine environment. The research network with partners from seven Baltic Sea states will start work with a virtual kick-off meeting on May 19.

“The particular strength of BaltVib lies in the fact that, for the first time, the socially highly relevant topic of ‘climate change and vibrios’ can be tackled for the entire Baltic Sea region and also across disciplines – microbiology, molecular biology, marine ecology and socioecology. And the future users of practical solutions are also on board right from the start,” comments Prof. Matthias Labrenz on today’s project launch. The IOW marine microbiologist is head of the international BaltVib project, which is funded with almost 1.45 million euros until 2024 within the European BiodivERsA programme*.

In addition to the IOW, scientific institutions participating in BaltVib are the German GEOMAR Helmholtz Centre for Ocean Research Kiel, the Marine Research Institute of the Lithuanian University of Klaipėda, the University of Copenhagen, Denmark, the Estonian University of Life Sciences, the Royal Institute of Technology Stockholm, Sweden, the Finnish Åbo Akademi University and Poland’s National Research Institute of Marine Fisheries. Today’s online meeting at IOW will be attended not only by scientists but also by experts from environmental and public health agencies, fisheries authorities and the respective ministries, who are directly concerned with the vibrio issue.

Vibrios and climate change
The term “vibrios” refers to all bacteria of the genus Vibrio. They are ubiquitous in the open sea and also occur in coastal, brackish, and fresh waters as well as in aquatic sediments. Approximately 130 different species are known, of which only about 10 % cause infections in humans, fish or mussels.

Climate change-induced shifts in the Baltic Sea, such as the 2 – 4 ˚C increase in surface water temperature expected by 2100, facilitate the growth of vibrios in general and thus also of the harmful species. Vibrio vulnificus, for example, which can lead to severe sepsis with fatal outcome in pre-diseased and otherwise weakened people simply through water contact, reproduces particularly well at water temperatures above 20 °C. The highest rates of infection therefore coincide exactly with the main tourist season in northern Europe between May and October. Vibrio wound infections have increasingly been observed during heat waves since the mid-1990s. Looking at the future, a significant threat to human health and the tourism industry can be assumed for the Baltic Sea region.

Seagrass beds, mussel beds & Co.: BaltVib counts on “ecosystem engineers”
In coastal seas like the Baltic Sea, beds of mussels, seagrass, and macroalgae such as bladder wrack, have proven to be particularly valuable. These habitats are characterised by a high biodiversity and take over many ecosystem functions important for both, the sea and humans. They are therefore referred to as “ecosystem engineers”. Recent studies indicate that pathogenic Vibrio species might be significantly reduced in these habitats.

This is where BaltVib steps in because the effect opens up the option of developing so-called nature-based strategies to control dangerous vibrios in coastal waters. “Various approaches are feasible,” explains Matthias Labrenz. “On the one hand, it is important to promote the protection of these valuable habitats wherever possible. On the other hand, it may make sense to use artificial underwater structures to specifically promote the establishment of seagrass or mussel beds in areas where people interact intensively with the sea,” the IOW researcher continues.

However, in order to develop effective strategies to mitigate the Vibrio problem, many fundamental questions still need to be answered: What is the current Vibrio status of the Baltic Sea? What can be learned from historical records? Can climate change-related Vibrio scenarios for the future be described more precisely than before? Which ecological key factors actually regulate Vibrio prevalence? Labrenz: “We don’t yet know, for example, why there might be fewer vibrios in the vicinity of seagrass beds and how effective other ecosystem engineers are in this respect.” Furthermore, the potentially Vibrio-reducing habitats are also influenced by climate change – a factor that also needs to be better understood, the marine researcher elaborates.

The BaltVib research programme covers a wide methodological spectrum, from historical studies and computer-based future modelling to extensive sampling campaigns, laboratory and field experiments, and the addressing of technical and organisational issues regarding the implementation of structural measures in the sea to promote ecosystem engineer establishment. “Since the Baltic Sea is an ideal model system for many marginal seas, we hope to produce fundamentally valid results that are transferable to other systems worldwide. Dangerous vibrios are not only found in the Baltic Sea,” project leader Matthias Labrenz concludes.

*BiodivERsA (www.biodiversa.org) is a network of national funding organisations that promotes Europe-wide research on biodiversity and ecosystem services. In this context, BaltVib is funded by the EU, the German Federal Ministry of Education and Research, the Innovation Fund Denmark, the Estonian Research Council, the Research Council of Lithuania, the Swedish Research Council for Environment, Agricultural Sciences and Spatial Planning, the Polish National Science Centre and the Academy of Finland.