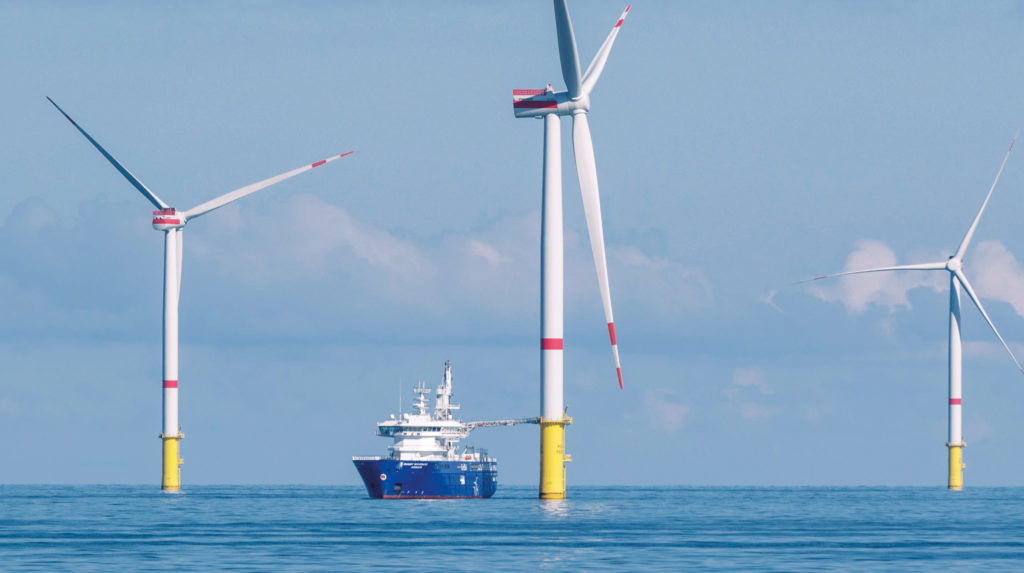 Hamburg, 10th August 2022 The Federal Maritime and Hydrographic Agency (BSH), in cooperation with the Helmholtz-Zentrum Hereon, both members of the DAM, has for the first time been able to measure components from sacrificial anodes in the water and sediment around offshore wind farms in the North Sea. Even if no direct effects on the marine environment are currently apparent, so-called impressed current cathodic protection systems are to be increasingly used for corrosion protection in the future.

The expansion of offshore wind energy production in the North Sea and Baltic Sea is an important part of the energy transition. Currently, more than 1500 wind turbines and 30 transformer and converter platforms are already in operation in German marine waters. As part of the research project “Chemical Emissions from Offshore Wind Turbines” (OffChEm), the BSH and Hereon have investigated the extent to which components of galvanic anodes, so-called sacrificial anodes, are released into the marine environment. Sacrificial anodes protect offshore wind turbines from corrosion by dissolving themselves. Together, the BSH and Hereon recently published a summary of the project results.

In the laboratory, the researchers analyzed the components of various sacrificial anodes and identified the following elements for further investigation: aluminum, zinc, indium, gallium, lead and cadmium. Indium and gallium are tracers for sacrificial anodes, since they hardly occur naturally in the ocean and no other sources are known at sea. The researchers then took various water and sediment samples in the vicinity of several offshore wind farms in the North Sea and analyzed them for the selected constituents using specially developed methods.

The results show that the concentrations of the constituents in both water and sediment are mostly within the known variability for the North Sea. The researchers have observed sporadic elevated concentrations of aluminum, zinc, indium and gallium in the water. This can possibly be attributed to certain weather conditions where the water around the offshore wind farms was minimally exchanged and mixed. In the sediment, they also found sporadically elevated local concentrations of lead, the causes of which cannot yet be clearly identified.

No immediate effects discernible to date

Such chemical emissions from the corrosion protection of offshore wind farms could increase further as a result of the ongoing expansion of offshore wind energy. The BSH is responsible for approving offshore projects in German marine waters and supports the development and use of processes that are as environmentally friendly as possible. For example, the use of zinc-based sacrificial anodes is already not permitted today. In future projects, wind farm operators should increasingly use so-called impressed current cathodic protection systems, as these are associated with very low chemical emissions into the marine environment.

The results have been published in several scientific articles. In addition, the results will be made available to the Federal Ministry for Digital and Transport (BMDV) Network of Experts, where they will contribute to the topic area “Environment and Transport” and the key topic “Construction and Construction-related Emissions”. The research is currently being continued as part of the follow-up project “Chemical emissions from offshore wind turbines: possible influences on the marine environment and their assessment” (OffChEm II). The focus here is on the investigation of offshore wind farms in the Baltic Sea.